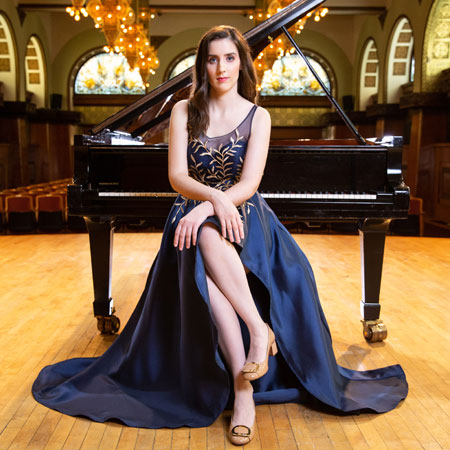 Monika Miodragovic was born in Belgrade, Serbia. She began playing piano at the age of five. In 2008, Monika was selected to perform with her duo at the internationally-recognized Kolarac Hall. The same year, she moved with her family to Chicago. In June 2011, she won the Young Artist Competition and performed Chopin’s C minor Nocturne at the Chicago Symphony Hall. Monika received her Bachelor’s Degree in Piano Performance and Music Theory at the University of Michigan under the mentorship of Prof. Christopher Harding. In April 2014, she won second place with her Brahms and Shostakovich quintet at the school's inaugural Dale and Nancy Briggs Chamber Music Competition. Monika continued her piano studies as a Teaching Assistant at Florida International University under the tutelage of esteemed concert pianist Kemal Gekić. In November 2015, she performed Chopin’s D-flat Major Nocturne in the Weill Recital Hall at the Carnegie Hall. The following year, Monika won the FIU Concerto Competition and performed Chopin’s E minor Concerto with the FIU Symphony Orchestra. In April 2017, Monika was awarded the Graduate Performance Award as a recognition for her achievements. In June 2018, Monika performed Debussy’s La soirée dans Grenade at the Stern Auditorium at the Carnegie Hall. Since Fall 2018, Monika has been pursuing a Performance Diploma under the tutelage of Dr. Winston Choi at the Roosevelt University’s Chicago College of Performing Arts. In April 2019, she performed Gershwin’s Porgy and Bess as part of CCPA Symphony Orchestra at the Harris Theater. In May 2019, she performed Stravinsky’s Firebird with CYSO at the Chicago Symphony Hall. Since May 2018, Monika was a Teaching Artist for Children’s and Pre-Collegiate Programs at the Continuing and Community Education at Columbia College Chicago. As of September 2019, she will continue teaching as a Teaching Artist at Old Town School of Folk Music at Columbia College Chicago. Monika is also an avid solo and chamber music performer in the Chicago area.

Started at the Old Town School in September of 2019