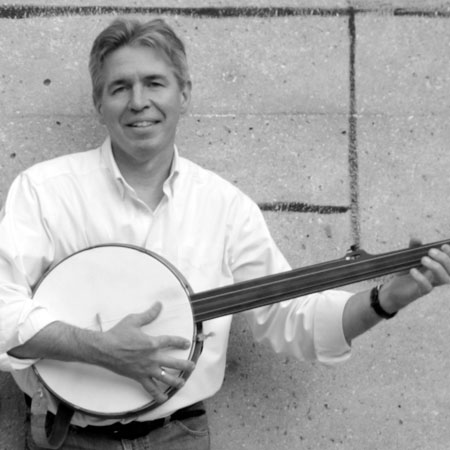 Michael Miles is one of America’s most innovative banjo players. With expansive unpredictable repertoire and high-reaching musicality, his work is described by Banjo Newsletter as, “a brilliant tour-de force that effectively obliterates the limits of what was thought possible on clawhammer banjo.” Hailed by Chicago’s legendary WXRT as, “Genius.” The Chicago Sun-Times simply says, “Give the banjo to Michael J. Michaels you’ll hear a mighty soul stirring sound.”

When Pete Seeger heard Michael’s very first recording his response was, “This is enough to make me want to learn to play the banjo all over again.” That was 1990. Over the past 25 years, Michael has created and refined an evocative musical, education, and theatrical voice.

In addition to his work on the banjo, Michael as an MA in Guitar Performance with a particular interest and expertise in fingerstyle. Over the years, he has led classes in Fingerstyle Jazz, Great American Songbook, James Taylor, John Martyn, Richard Thompson, The Beatles, and fingerstyle arranging.

Michael carries his musicianship even further into the theatrical arena. Here he has created over a dozen “musical documentaries for the stage” that combine musical performance with literature, politics, and humor. 2015 offerings include his signature one-man show From Senegal to Seeger and his latest work Way Down the Road.

These shows and Michael’s concerts have been featured at places like the Smithsonian, the Old Town School of Folk Music, Royal Opera Theatre of Marrakesh, Sage Gateshead in the UK, Musical Instrument Museum in Arizona, the Chicago Humanities Festival, and Johnny Keenan Banjo Festival in Ireland. He’s equally at ease in the intimate setting of a house concert or library.

Finally sharing the good fortune of his musical world, Michael is a passionate educator who in the course of any given year leads school assemblies, songwriting residencies, workshops, and classes at festivals. Michael served as Program Director at the Old Town School from 1984 - 1998, bringing the School international acclaim and raising enrollment from 200 students to move than 4000. He was the first ever Artist-In-Residence at the School from 2005 - 2007.

In addition to his work with the Old Town School, Michael is also a teaching artist for the Ravinia Festival and guest professor at Vilanova University and the VanderCook College of Music.

Started at the Old Town School in September of 1979