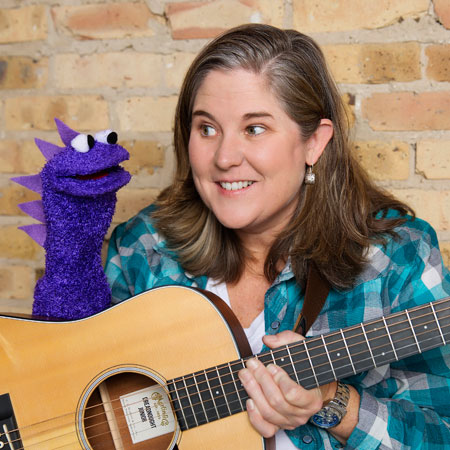 Laura's teaching philosophy: "Music is for everyone. It can be shared with everyone and there is so much beauty and fun in sharing music with little ones and their parents. I love teaching at the Old Town School because it brings music to its most basic level. Singing songs that are passed down through generations, as well as sharing new songs, and in Wiggleworms, the babies and toddlers are up-close to the music and even get to strum the guitar themselves. It brings me joy!

Laura is a Chicago-based, nationally touring children's performer, teacher, songwriter, and producer, with an ear for a catchy melody. Armed with her acoustic guitar, she has written and recorded three albums for the folk-pop listener (solo and with Sweet Hello), and three award-winning children's CDs, Kids in the City (2009), Shining Like a Star (2011), and In a Heartbeat (2014). She also co-produced, along with Rich Rankin, the Parent's Choice award-winning Wiggleworms Love You CD (2005). Doherty was named one of the top four children's musician's in Chicago, by Time Out Chicago. She performs all around Chicago and nationally, with her band The Heartbeats.

Laura teaches in the Old Town School’s of Folk Music’s wildly popular early-childhood Wiggleworms program, where she has taught since 1998. Laura is also the former director of the Wiggleworms program, (from 1998-2009) and in 2010 she took a daring leap to go full-time as a children's musician. Laura also teaches adult group guitar classes on occasion, including the women’s acoustic class and lead guitar.

Started at the Old Town School in January of 1998