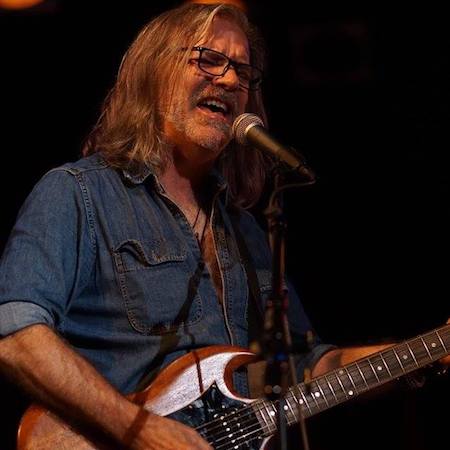 I started playing guitar at age fifteen; I taught myself by listening to records. I played in bands ‘til I was about twenty-two, then veered off to earned bachelor’s degrees in painting and in English, and ultimately a Ph.D. in American literature. I came back to playing music about twenty years ago, thanks to the Old Town School of Folk Music, where I was originally a student in ensembles, from which the band Mystery Train formed; I began teaching here myself in 2002, with a (misguided) hiatus from 2003 to 2008.

I’ve been a singer, lead guitar player, songwriter, and band leader in many, many, bands, and organized many, many projects—including the first Old Town School of Folk Music tribute in Lincoln Square in 2001—from disco shows to classic rock & roll tributes to original music. I teach ensembles at OTSFM—Bowie, Springsteen, Prince, Petty, Stones, The Isleys, Stevie, Gladys, funk, disco, rhythm and blues, ‘70s, ‘80s, ‘90s—lots of stuff.

My strength as a guitarist and teacher is playing—and explaining—soul, R&B, funk, and ‘70s rock guitar (Stones, Zeppelin) and breaking down chord and fretboard theory into practical, economical, useful terms. I consider the gap between lead and rhythm playing an artificial (and spurious) one; there are only guitar players, whether acoustic or electric, and anyone who puts some time into it can become one.

I also think that contemporary music teachers and players rely WAY too much on the terminology of European classical theory, which is only somewhat relevant in learning American vernacular music. I am self-taught, and came to understand "music theory" through pattern recognition after learning hundreds of songs, and the riffs and solos in them, by ear. My contention is that music is a set of consensual cultural inventions, not a "theory," and that what we are really learning is a set of vocabulary and idiomatic expressions based on a flexible but limited set of assumptions. In our case, most of that vocabulary comes from African American culture.

I don’t know what my life would be like without music, and I can’t imagine who I’d be if I hadn’t taken an Old Town School ensemble class from Jimmy Tomasello in 1998. But I’ve done many other things in my life too. I taught college writing and lit classes for twenty years, I have three nearly-grown daughters, I still paint, and I’ve written a little fiction and a LOT of cultural, historical, and political analysis of the United States. I was program manager at the Sue Duncan Children’s Center, a longstanding afterschool program on the South Side, for nine years. And I read a lot.

Started at the Old Town School in September of 2008

Playing by Ear for Guitarists with John Mead