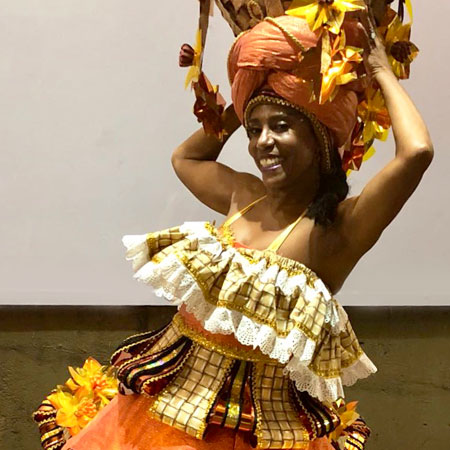 Raised in Rio de Janeiro, Dill (pronounced ‘Jill’) is one of the only experts in samba dance and performance. As a regular dancer in some of Brazil’s best known escolas de samba (samba ‘schools’) — groups of hundreds of musicians and dancers in one of the greatest festivals on Earth — Dill is one of the only performers in Chicago who represents the authentic Carnaval music that is part of Brazil’s rich musical legacy. She has held many titles in samba schools including ‘Queen of the Percussion Section’.

Besides samba, Dill is an expert in jazz, tap, modern, and folk dance of Brazil. She was an instructor of Brazilian regional dance forms for many years. Since relocating to Chicago in 2003, Dill has dedicated herself to music, and can be seen regularly singing with the Evanston Escola de Samba, Cor do Brasil, and her own trio, singing the classics of Brazilian samba, bossa nova, and Brazilian jazz and pop. Her repertoire ranges from classic 1940’s era sambas of Ary Barroso and Noel Rosa, to the cool, 1960’s bossa nova hits of Antonio Carlos Jobim, to the modern Brazilian pop of Caetano Veloso and Carlinhos Brown.

Started at the Old Town School in September of 2005

Learn to samba like the Brazilians do! Shake your hips and move your body to the rhythms that are the heartbeat of Brazil. From Rio de Janeiro, the home of Carnaval, through African-influenced Bahia, and all the way to the Amazon, communities congregate to dance and play samba. The regional styles of samba and fun combinations are explored in this aerobic class.