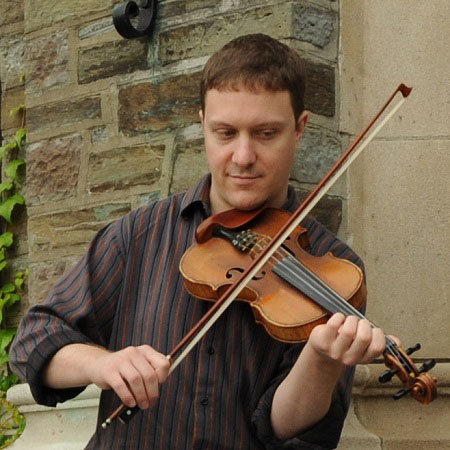 Devin Shepherd is a member of the Chicago-based ensemble Bua, winners of the 2009 Irish Music Award for "best traditional band," and a former member of Chicago Reel. He has been teaching and performing Irish fiddle in Chicago and throughout the world since 1998. His performance venues include the Kennedy Center in Washington, D.C., Milwaukee Irish Fest, Canada's Goderich Celtic Roots Festival, the New York New York hotel and Casino in Las Vegas, and the Paris Olympia theater in Paris, France. In addition to mentoring more than sixty private fiddle students, he has taught classes for The Goderich Celtic College (Goderich, Ontario), the Grand Canyon Celtic Arts Academy (Flagstaff, AZ), the Academy of Irish Music (Chicago, IL) the Center For Irish Music (Minneapolis, MN), the Irish Arts Center (New York, NY), The Riley School of Irish Music (Cincinnati, OH), The Winnipeg Irish Festival (Winnipeg, Ontario), The Community Music School (Santa Cruz, CA), and many more.

Devin greatly enjoys the process of helping beginning students grow into skilled and accomplished fiddle players. He has gained a strong reputation for his ability to break down and explain the nuances of rhythm, ornamentation, and bowing in Irish fiddle music. Devin does not heavily emphasize note reading with his students, though he believes beginning students should learn basic reading, a tool they are always thankful to have down the road. Devin displays great patience as a teacher, and truly believes that each and every student he takes on has the potential to become good at the fiddle, as long as they are willing to spend some time practicing. Devin goes out of his way for his students, taking the time to send them recordings and answer questions outside of lesson time. He has created unique exercises to help students master the techniques involved in fiddle playing.

Devin began learning Suzuki violin at age four, and at nine began learning to play Irish music. His mother immersed him in the deep-rooted Irish music scene of his hometown of Chicago, where he first studied with Kathleen Keane. Devin was awarded an Illinois Arts Council Master- Apprentice grant to study with famed Liz Carroll when he was twelve years old. During this formative period he won first prize in the Midwest Fleadh Cheoil Irish fiddle competition for nine consecutive years—another testament to his dedication to the tradition. Shepherd learned much about the styles and repertoire of Chicago by playing with many musicians born in Ireland, including Phil Durkin, Frank Burke, Albert Neary, Pat Cloonin, Noel Rice, and Úna McGlew. Devin has also gained knowledge about Irish music during his many trips to Ireland, starting from a young age. Most recently he has enriched his style through the recordings of legendary fiddlers Bobby Casey, Michael Coleman, Paddy Cronin , and John Doherty, as well as living legend James Kelly. While he currently resides in his home town of Chicago, he added to his knowledge of Irish music during a two and a half year stint playing professionally in New York City—another highly respected community for Irish traditional music. Devin has a degree in music composition from the Chicago College of Performing Arts.

Started at the Old Town School in January of 2016