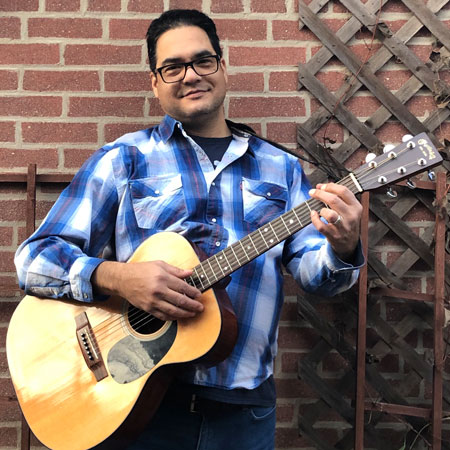 Albert comes from Corpus Christi, TX. In 1994, he moved to Chicago for its vibrant job market and legendary music scene. He soon happened upon the Old Town School of Folk Music, registered for a harmonica class, and so set forth on his ongoing journey of music and song...

Albert has always had a love for music. As a child he absorbed all sounds coming to him through the radio; Golden-Oldies, Classic Rock, Country, Folk, Disco, Pop, R&B, Soul, and Tejano. As a teenager and young adult, he developed a passion for the louder, faster, more depressing and sinister music of the day; Heavy Metal, New Wave, Punk Rock, Alt-Rock and Grunge. After arriving in Chicago, he rounded off his musical tastes with an awakening to Jazz and the Blues, while immersing himself in the burgeoning Indy-Rock and Alt-Country scene of the city.

Over the years Albert continued hanging out at Old Town School, and in 2001 became an official employee, working numerous roles, but chiefly as a concerts manager in the events dept. He loves to sing and play harmonica, but is mostly fond of making music on the guitar. His first lessons on guitar were in Latin Rhythms, he then moved onto and through the Core Guitar program. Over the years he has expanded his musical knowledge and skill at Old Town School, and is now a Teaching Artist, sharing what he has learned with others.

How does he do it?
“We learn to create music on the guitar by listening, training our ears to the sound of music, the notes, the chords, melody, harmony, tone.
We learn by sight, watching others, observing posture, by looking at our hand positions, their placement and movement.
We learn by touch, holding the guitar, strumming its strings, placing and pressing our fingers against the fretboard.
And mostly, we learn by engaging ourselves in practice and play, building our musical confidence, strength and ability.”


Started at the Old Town School in February of 2001