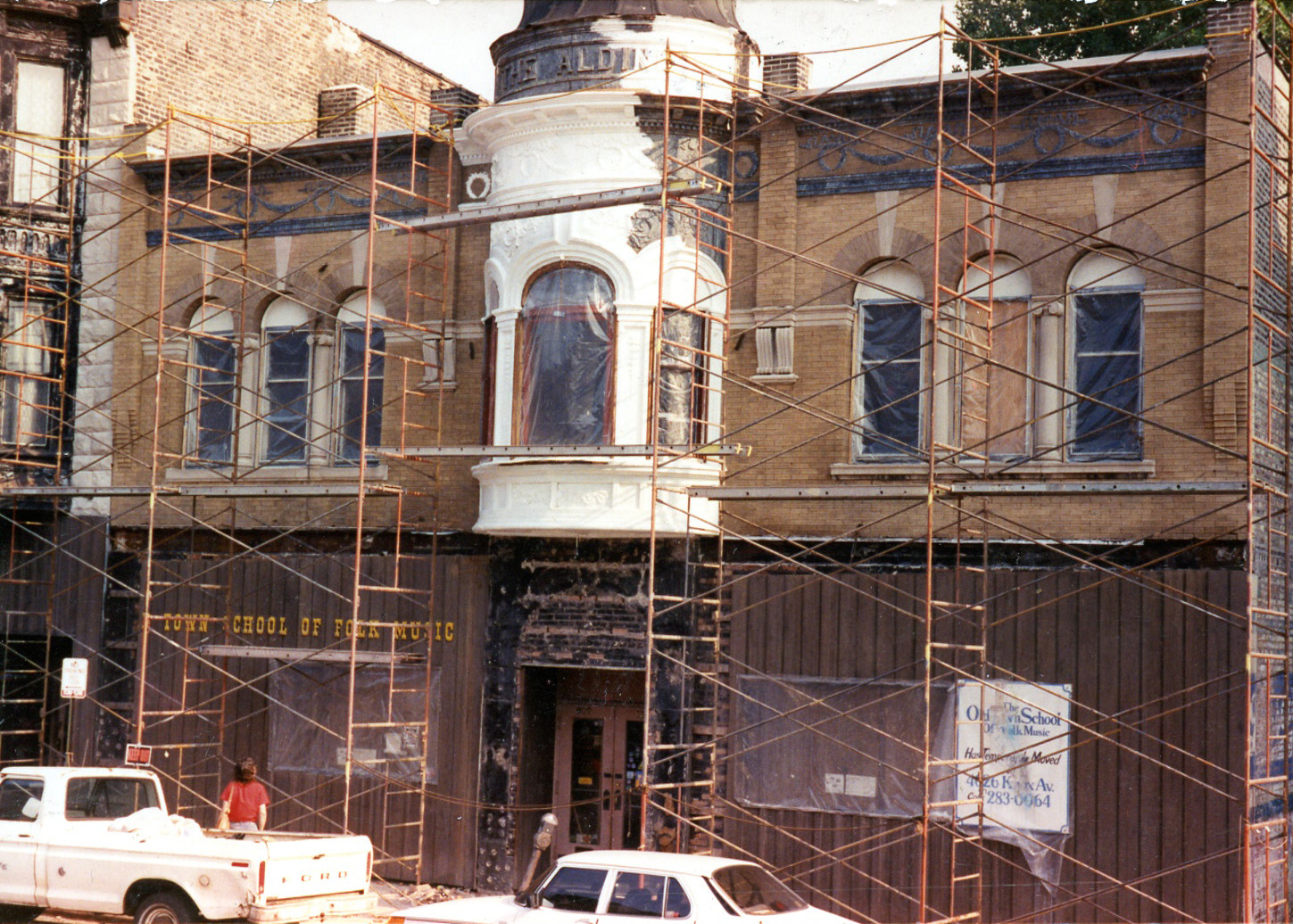 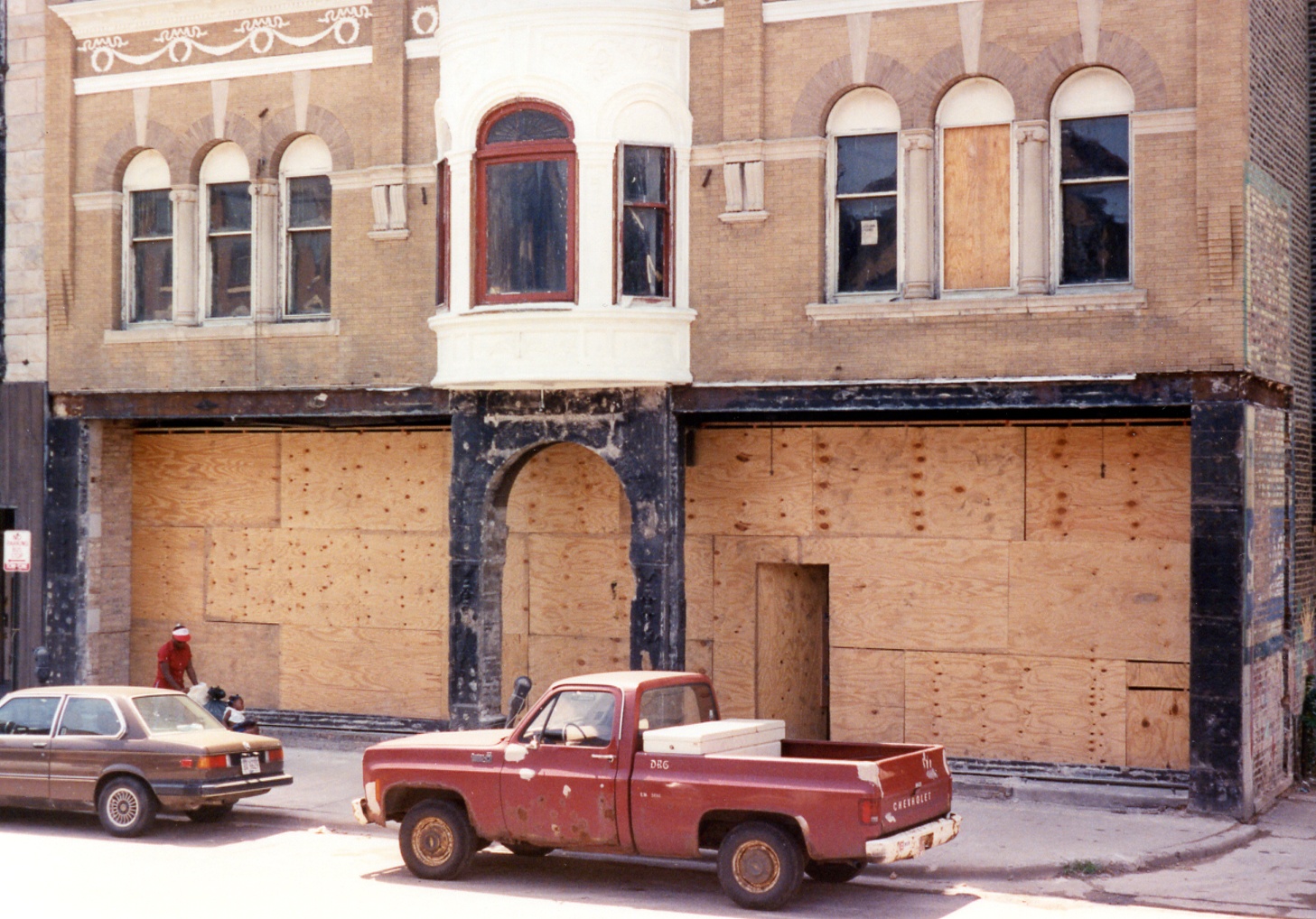 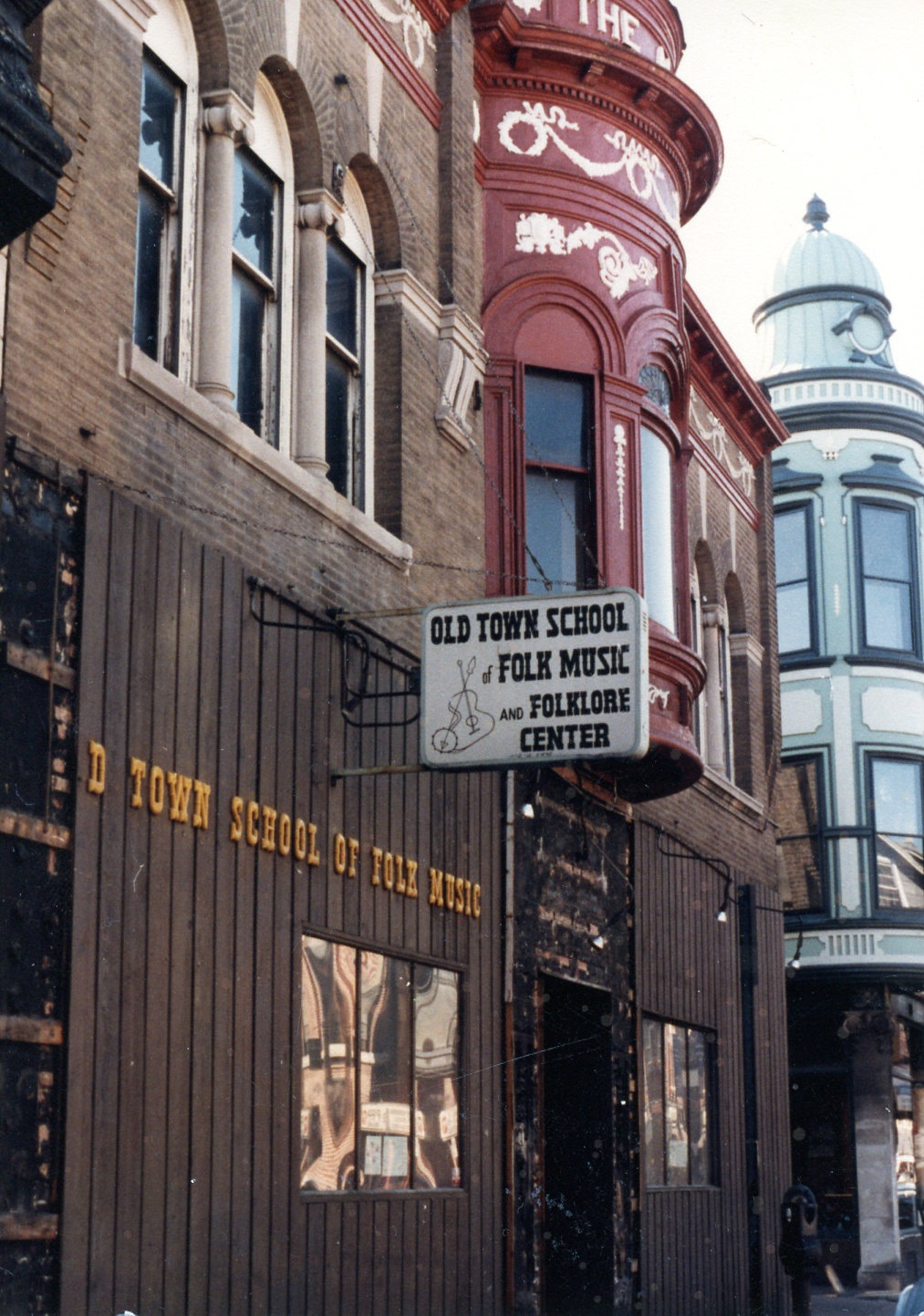 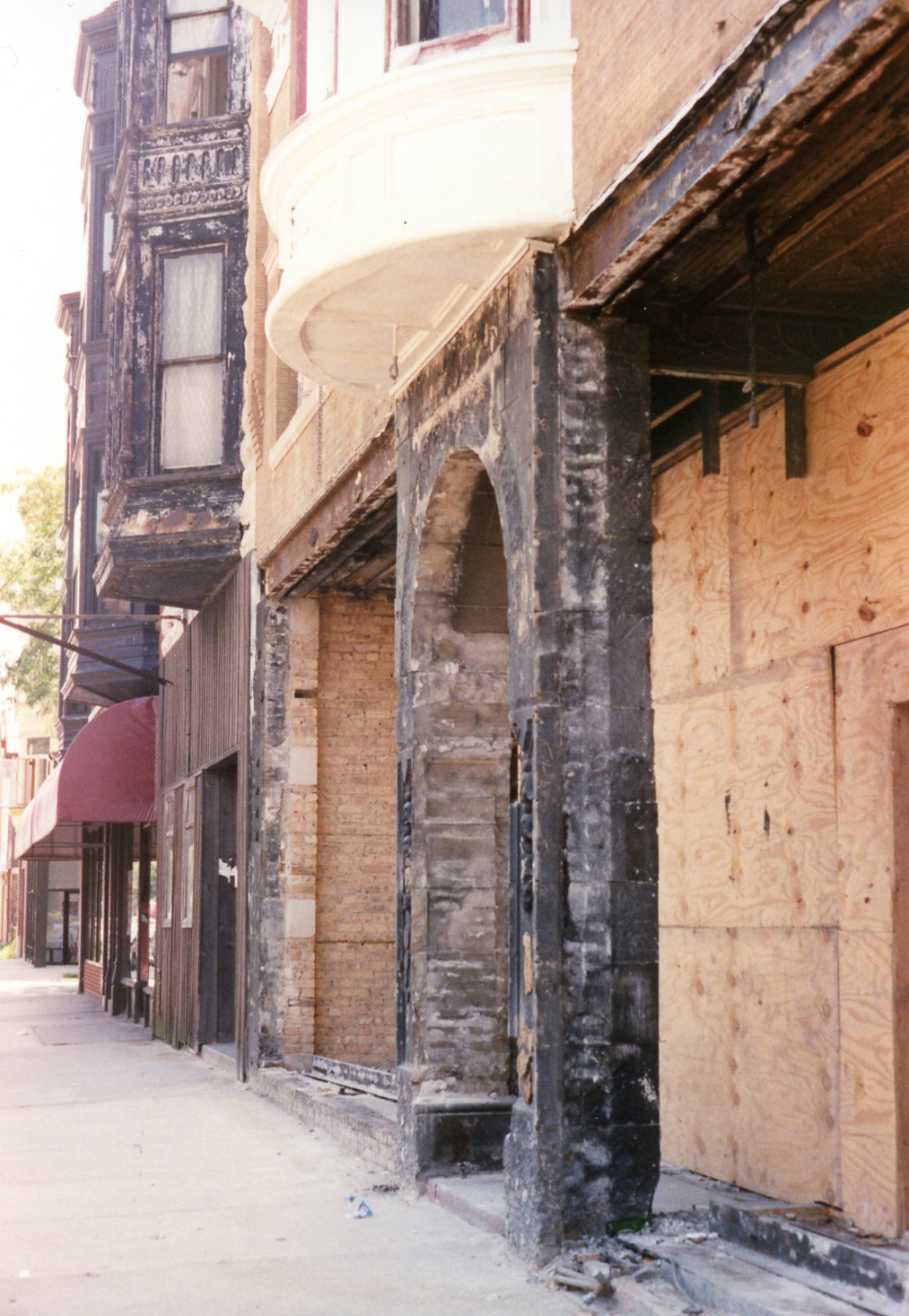 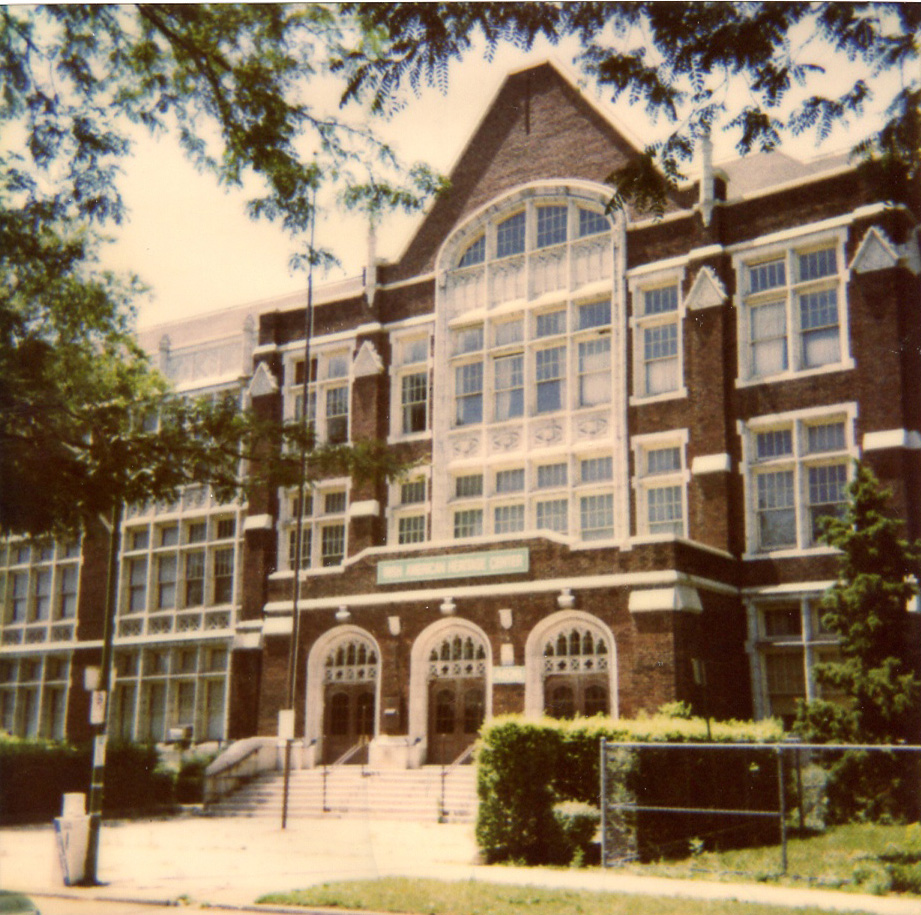 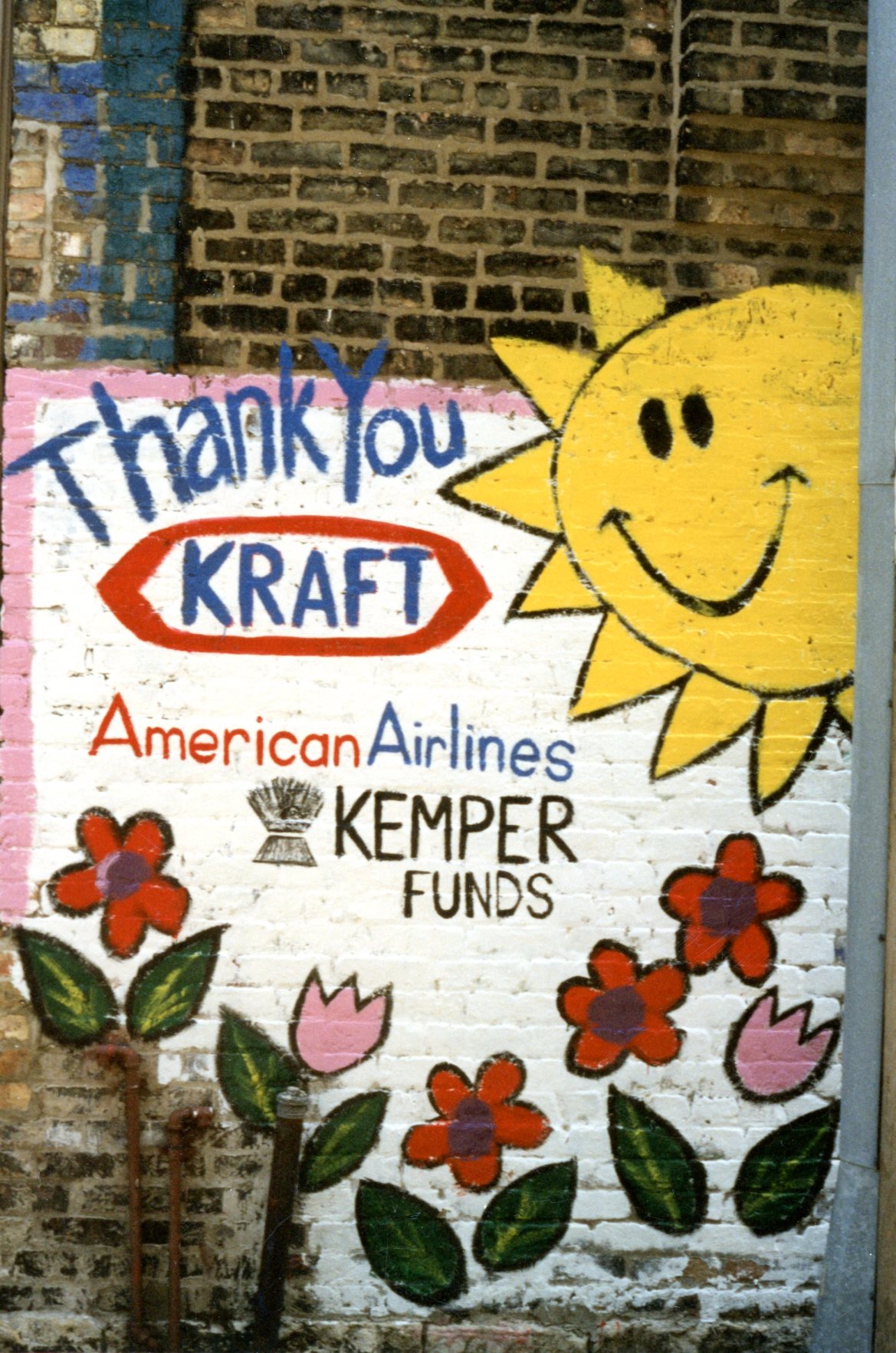 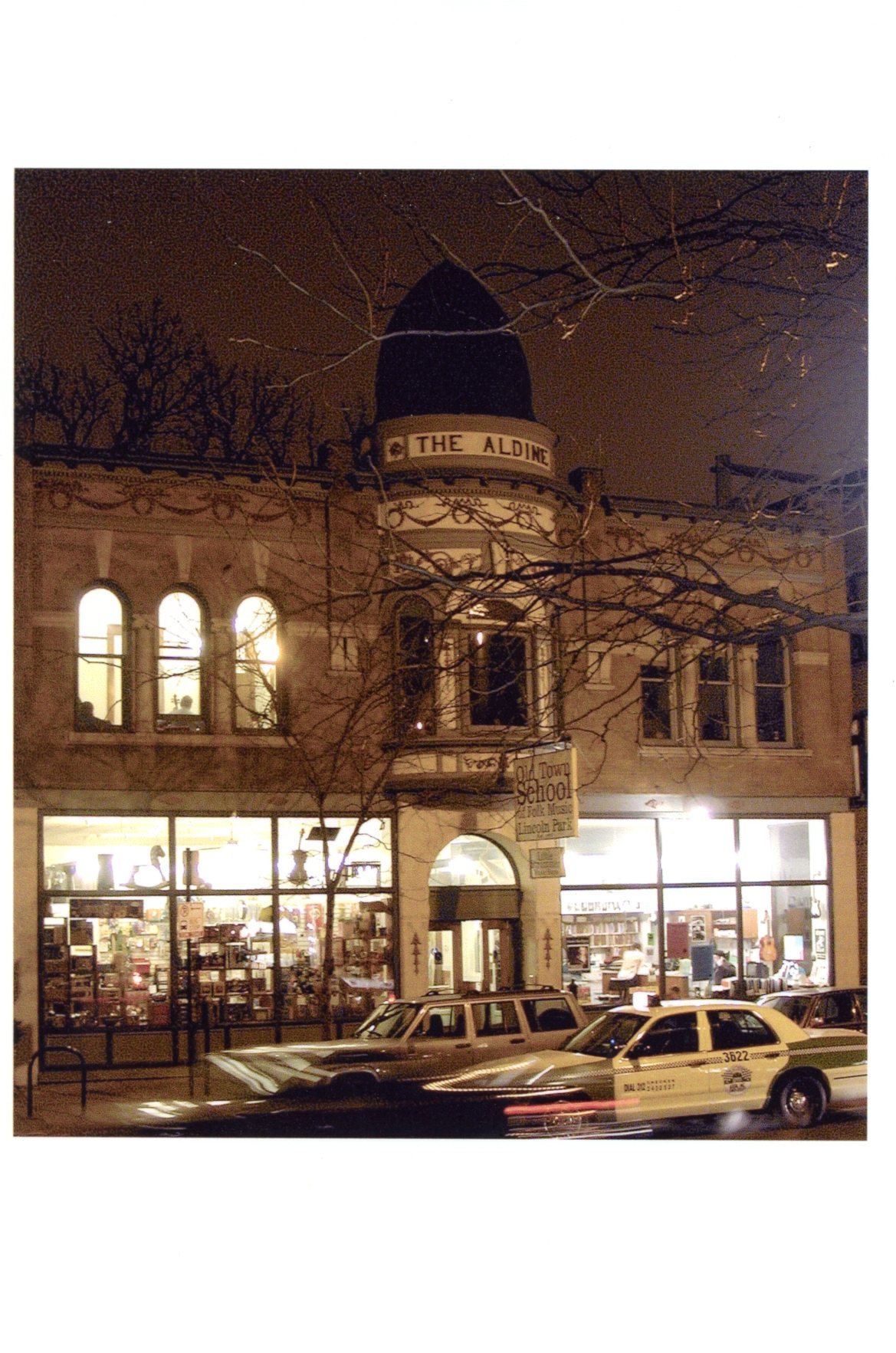 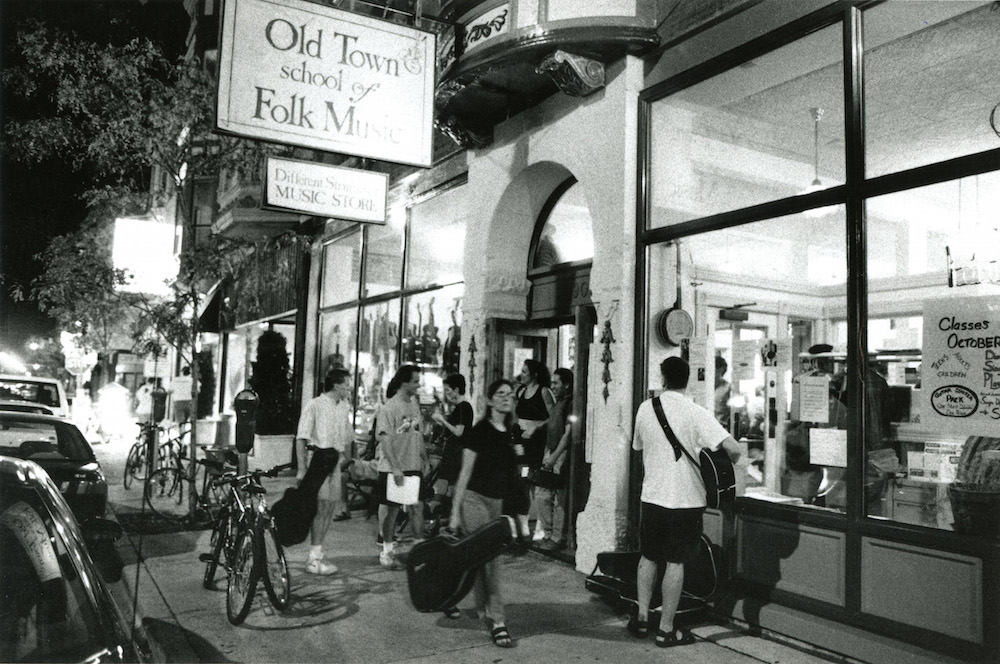 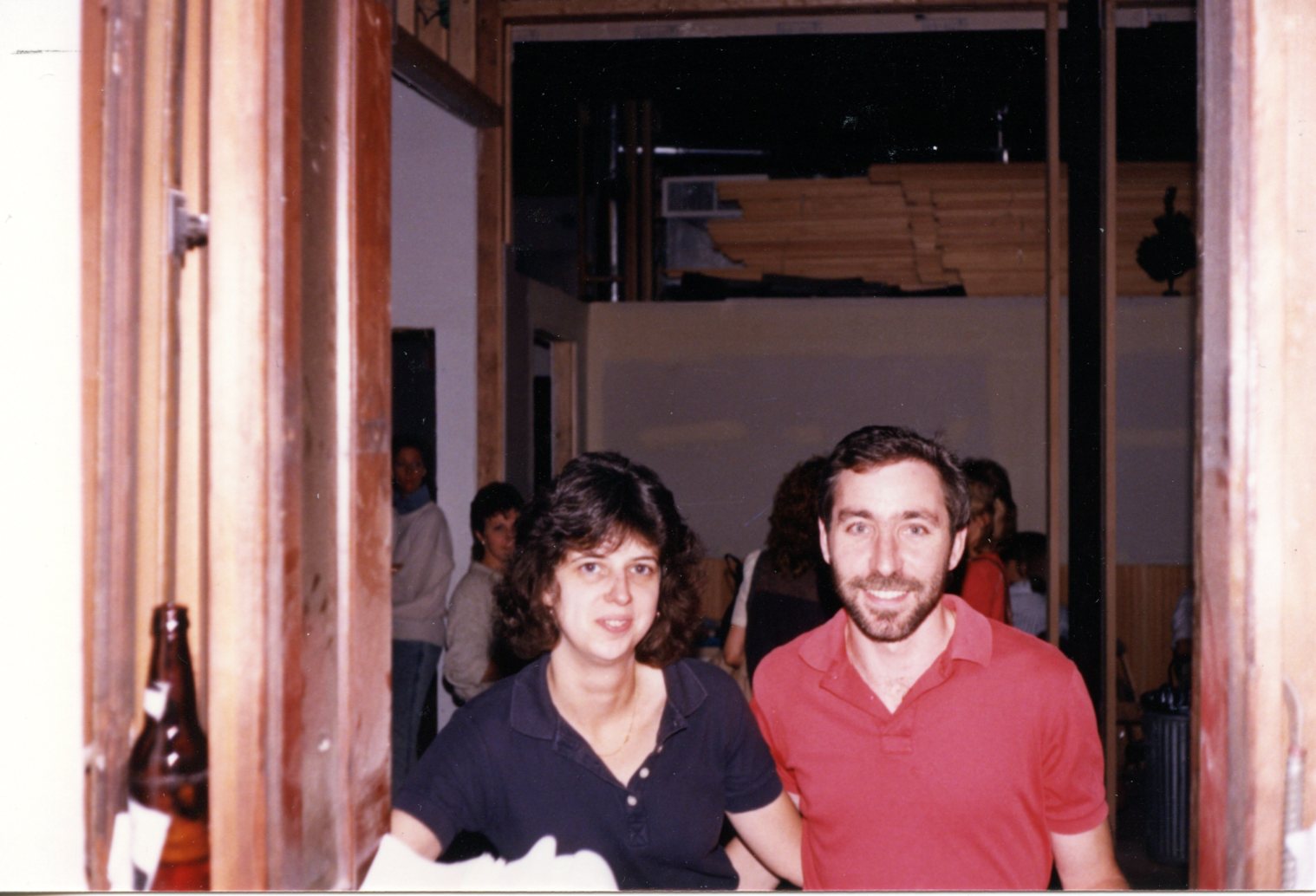 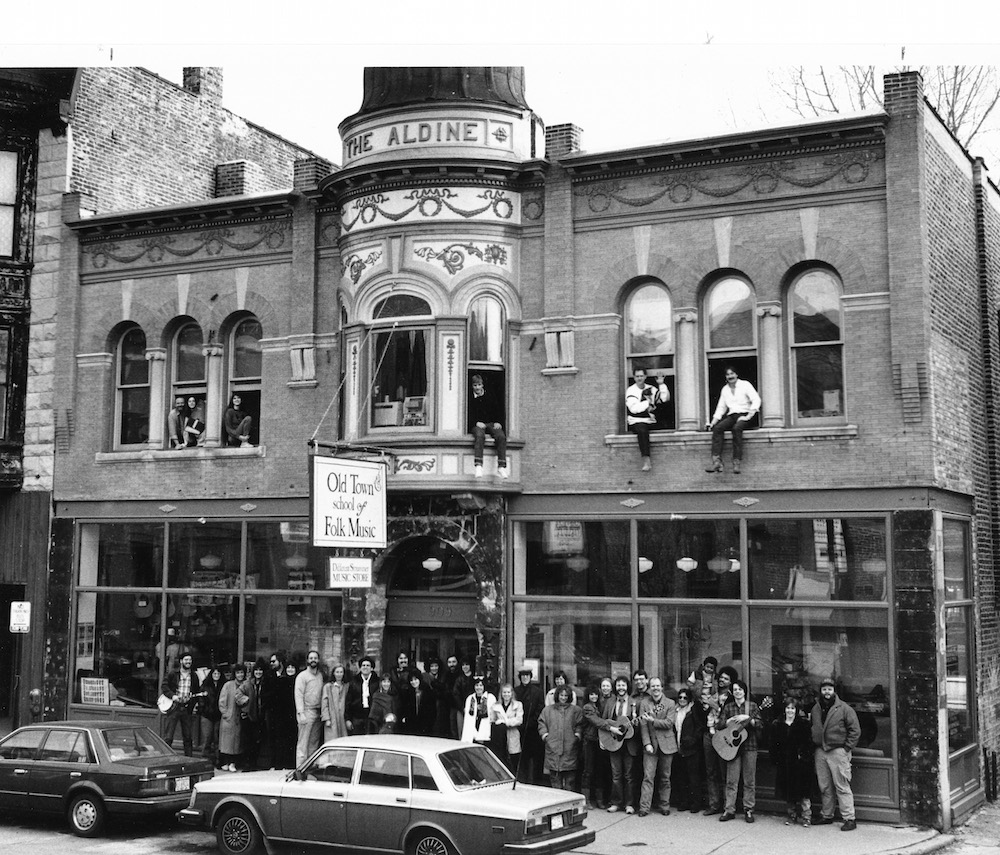 The Old Town School’s next decade was one of explosive growth, by every measure. Savvy leadership decisions positioned the school to benefit from a perfect storm of changing musical tastes, demographic shifts, and strategic decisions.

Once the Old Town School’s financial footing was restored and its musical life was flourishing again, its physical environment became the priority. “That building was a death trap…. The fact that anybody ever came there was remarkable,” Jim Hirsch remembered. “We were lucky that the floor didn’t collapse in the concert hall.” It "smelled like somebody had died in the men’s bathroom, and was just shoved under the floorboards." Before Elaine Moore started working there, she would walk past the building, thinking, “that place must be for crazy people now! I was afraid to go in. It looked so creepy! ....The whole façade was all boarded up.”

In 1986, the school embarked on a complete renovation of 909 W. Armitage–very nearly a gut rehab. The project was funded by the Old Town School’s first major capital campaign, raising over half a million dollars, and taken on by architect Fritz Biederman, a member of the Old Town School’s Board of Directors. In addition to bringing everything up to code (including, of course, new restrooms), the building environment was conceived to provide folk music experience. Hirsch told the Chicago Reader at the time, “You could come to the school and get the whole nine yards…hear the music in concert, see the artifacts of the music, and learn music in a class: a holistic approach to the subject, which I think will be unique in the country,”

Large, storefront windows now opened the school to the street and a new, central social space welcomed a new generation of music enthusiasts to enjoy concerts in the improved concert hall, research folk music in a new Resource Center and, of course, learn to play, in new classrooms and studios throughout the building.

The Old Town School reopened on Armitage Avenue in September of 1987, in time for the Old Town School’s 30th anniversary, commemorated with a concert featuring a parade of community musicians–Frank Hamilton even returned for a guest appearance. With the continuity of the institution thus underscored, change rushed into the new space.

Shifts in popular taste boosted the school’s fortune, as acoustic sounds returned to the pop charts in the late 1980s. After a decade dominated by the new digital sounds of the keyboard synthesizer and drum machine, perhaps it was a natural swing of the pendulum for listeners to crave a more organic, tactile sound again. “And all of a sudden, the public is getting to hear acoustic guitars, and they’re thinking, ‘I could play an acoustic guitar.’” And if you wanted to learn to play guitar in Chicago, the Old Town School was still the place to go.

But the Old Town School also wanted to “broaden the tent” and find its relevance for a more diverse Chicago and a more interconnected world. As Jim Hirsch would tell potential funders, “Folk music, what we do, is at the basis of all the arts.… You trace dance form, any other form of the arts back far enough, and it all starts with a very organic, community set of traditions. That’s what we do. We’re the only organization in the city that cares about that, that wants to represent that.”

The late 1980s also brought a surge in interest in music from beyond English-speaking North America. “World music,” as a marketing category, was invented by record companies, a label for the growing number of records from Africa, Latin America and elsewhere—though the term was thin on descriptive power (obviously, humanity has not yet encountered any music from beyond the category of “world”). “[It] was probably more of a marketing phrase for white people,” Jim Hirsch remembered, “than it was for any community groups…. But if I was talking to a Hispanic person, I’d never use that phrase.”

There was a growing audience—Jim called them “the culturally inquisitive”—for ethnically diverse music underpinned by traditional authenticity. They were not demographically dissimilar to existing folk music audiences—mostly white, middle-class, educated, and usually politically liberal—“but they’re people who are just into new experiences, and hearing the newest, coolest thing.”

The Old Town School began to build up the diversity of its course and concert offerings, starting at home. On advice from the NEA (“they will not come to you, you must go to them”), Michael Miles began to reach out to local musicians in different ethnic communities. “That took me down lots of interesting places.... Tunisian percussion, or flamenco dance, or Indian tablas, or Django Reinhardt guitar. I mean, you name it….All the stuff that’s there, it was my job to find those people.” It was a whirlwind tour of the-world-in-Chicago, with the Old Town School trying to bridge the cultural gaps with face-to-face learning. Here, world music was an experience, not a record bin.

Percussion styles tended to be the most amenable to multicultural teaching at the Old Town School, including Latin, Polynesian, South Asian, and African traditions. These were successful enough to justify the creation of a new percussion department.

The most accessible entrée to “world music” instruction, however, was dance. Tap, hula, Irish step dancing, West African dance, and belly dancing have been among the most popular and longest-running dance classes since the 1990s, and as these programs grew, they began to build long-term followings.

At the same time, the demographic landscape of Chicago was changing rapidly. Jim Hirsch realized “so I’m looking at these numbers and thinking, my God, this is an institution that is dealing with the traditional music of people, and it’s ignoring 65% of the people.” Although the school’s founders had pursued ethnic and racial diversity in the 1950s and 1960s, it was as matter of principle—not survival. The school carried on quite well as this priority slipped and the folk music world, whether as a genre of popular music or as a pastime, remained stubbornly white. By the end of the century, however, non-Hispanic whites were indeed only 42% of the Chicago population. The Old Town School had to attract a broader audience to thrive in the 21st century.

One of the school’s earliest efforts to reach new communities was the Festival of Latin Music, first held in the summer of 1985, and annually thereafter until the turn of the millennium. Well-known Latin American performers performed, like Flaco Jimenez and Lydia Mendoza; about half the audience members were newcomers to the school, and about half were Hispanic. The Festival of Latin Music was one of the earliest major cultural events or institutions in Chicago to foreground Latin American cultures.

Most events could not serve as both “world music” and “multicultural outreach,” however. Hirsch adds, “I think one of the lessons that we learned real, real fast was that if you want to engage audiences, you have to provide programming that has relevance for those audiences. Did the Old Town School of Folk Music, which is basically a white organization, have a right to present and interpret the culture of [another] community? There were some very interesting and challenging exchanges.”

The school tried to avoid conflating outreach with charity, under the guidance of new Director of Community Outreach Juan Díes. “I think it was completely fair to ask for the communities to support the programs because these audiences were already supporting other industries in Latin music.” In fact, with corporate sponsorships, the Festival of Latin Music had been turning “a tidy profit.”

Juan primarily targeted Latino audiences, through a variety of programs. The central piece was the a Wednesday-night concert series he started in 1995, La Peña. Originally starting with an open mic, it eventually focused on a performance by a local or visiting musician representing a specific tradition of Latin American music. La Peña drew a steady, weekly audience for over 10 years, and over that period, the enrollment of minority students tripled, with Latinos the largest part of this growth.

One other new market spurred the Old Town School’s growth: babies. Inspired by the Orff method of teaching music, Kathy Lahiff had started offering a music class for infants and toddlers in 1985. Caregivers and children would sing, play (or at least bang on) simple instruments together, learning developmentally appropriate activities songs. Chicago parents enrolled in droves. The Wiggleworms program doubled and then tripled in size during the 1990s, and continues to be a cornerstone of the Old Town School’s financial success (23% of the school’s enrollment in 2016), helping to subsidize less popular programs.

The Old Town school’s outrageous growth during these years could have threatened its sense of community. Its character certainly did change, but students found new ways to find a musical home at the school.

Michael Miles’s inspiration to build ensemble classes into the curriculum was one such path. Ensemble classes allowed students who had progressed beyond the beginning levels to create real music and find a their own musical community nested within the Old Town School, while continuing to develop their technical skills. They soon took on a life of their own, and ensembles with staying power spawned other ensembles creating what teacher Steve Levitt calls “clans.”

One of the the oldest, continuously running ensemble classes is the Old Time String Ensemble, taught by Paul Tyler and Steve Rosen since 1990. It grew quickly, with 20 to 30 members by the mid-1990s. Students would enroll for years at a time—“wouldn’t miss a session,” according to Paul—and close relationships grew among them. Rooted in the oral tradition, the ensemble learns tunes by ear in small groups, building students’ musical social skills and confidence to join jam sessions outside the school. The Early Country (later Vintage Country), Charlie Pool, and New Lost Ramblers Ensembles have drawn from the same “clan” of musicians.

But the school was ready to branch out to rock and pop, starting with Michael’s idea for a new "Blues School" (its descendant in the current catalog is “Blues Band–Live!”). “Instead of a class of fifteen guitar players, it was gonna be drums, bass, harmonica, a couple guitars, saxophone, singer, whatever. And we’d take whoever signed up and...place them in appropriate ensembles with other students.”

A press release announcing this new ensemble concept got picked up and to everyone’s surprise, ABC National News and CNN both showed up with camera crews on the Blues School’s first night. The ensemble has evolved since then, led for many years by Lenny Marsh and Steve Hutchins, but then and now, the end goal of each session is a final performance at a blues club like Buddy Guy’s.

The first rock ensemble was Jimmy Tomasello’s Bob Dylan class—which (like the legend himself) shifted from folk to a rock over time—followed soon after by the Grateful Dead Ensemble. Jimmy settled on the record album as the natural organizing principle for the rock-n-roll generation. “I said… ‘this session, we’re gonna take the album Street Legal, and we’re gonna do it from cover to cover.’ Boom.”

This format, with “self-activated” core membership whose friendships extended beyond the classroom, set a template for popular music ensemble classes to come. “They all want the same thing: they want a cool band,” Steve Levitt observed. “They’ve done it knowing that the relationship with the school gives it underpinning so that if someone were to stop coming for a while, it’s OK, they don’t destroy the band.” These cohorts would become cornerstones of Old Town School social life in coming years.

Remarkably soon after the remodel of 909 W. Armitage, the Old Town School outgrew it and began looking for a new building. By 1997, the School had over 1000 adult students per session crammed into the building. Although the move was clearly necessary, the decision to move beyond the neighborhood was “unbelievably frightening,” Hirsch recalled.