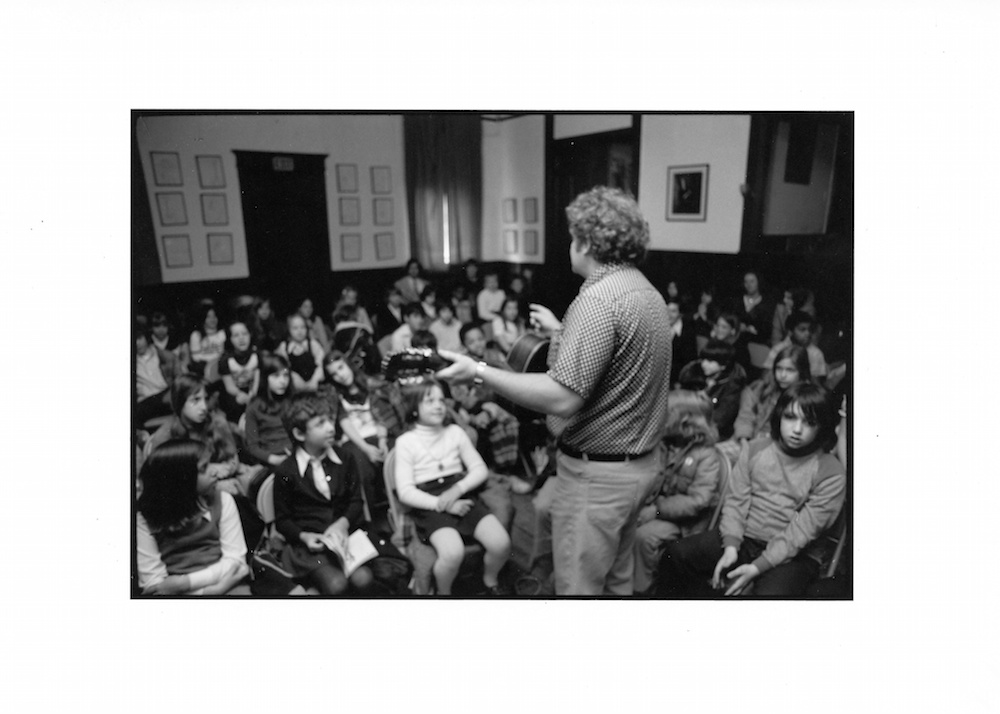 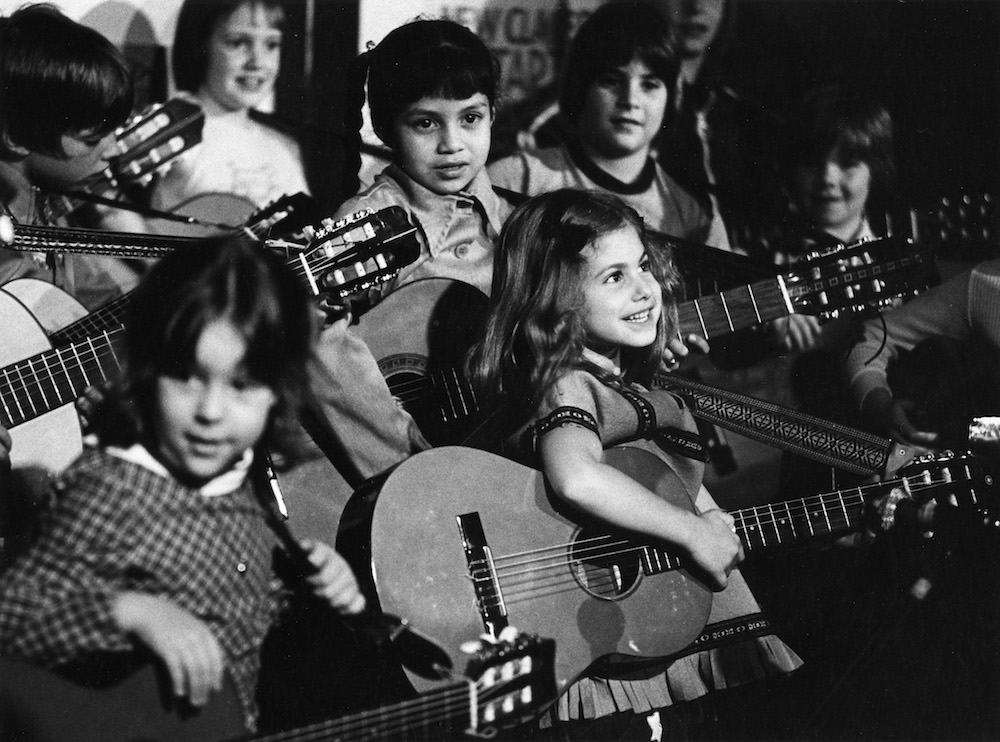 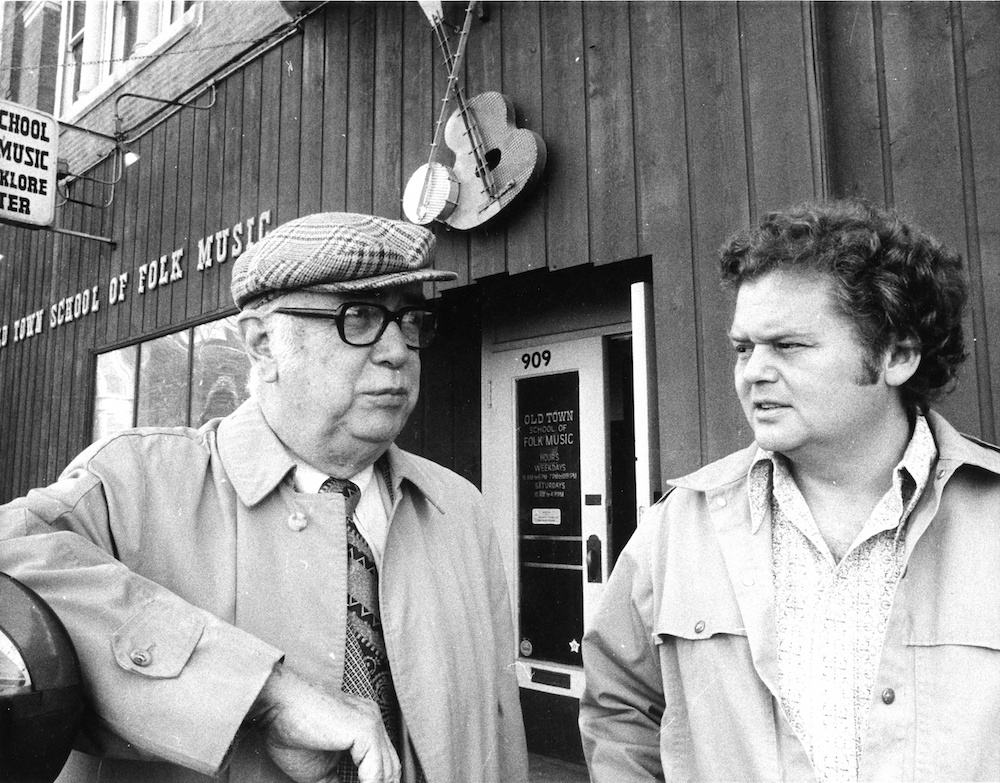 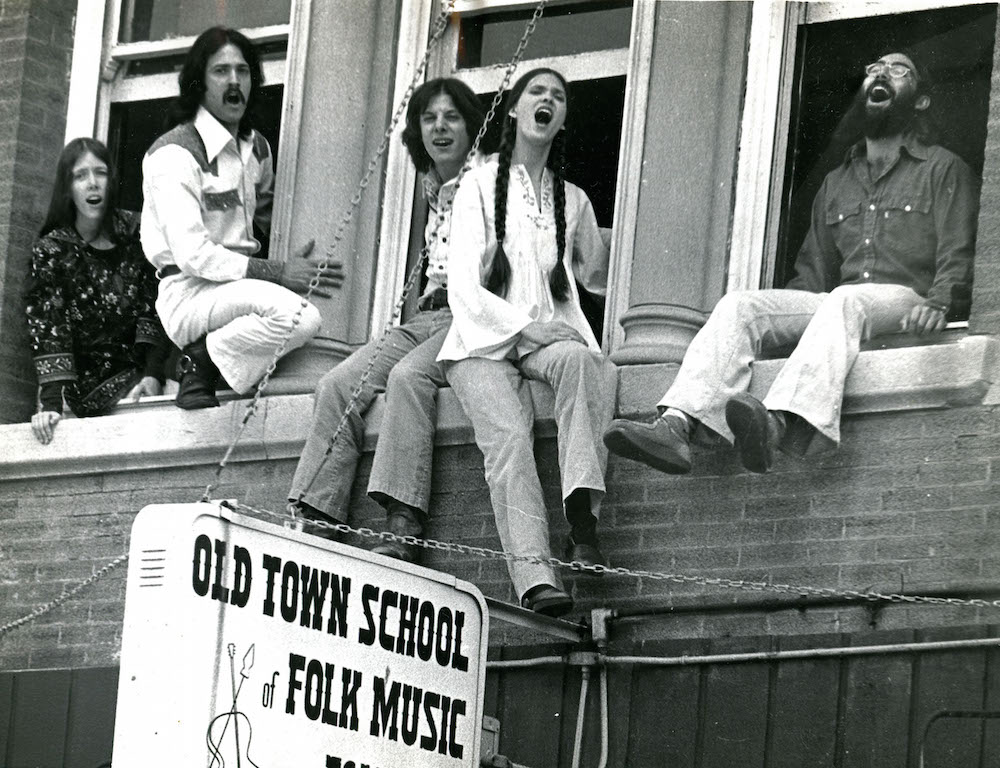 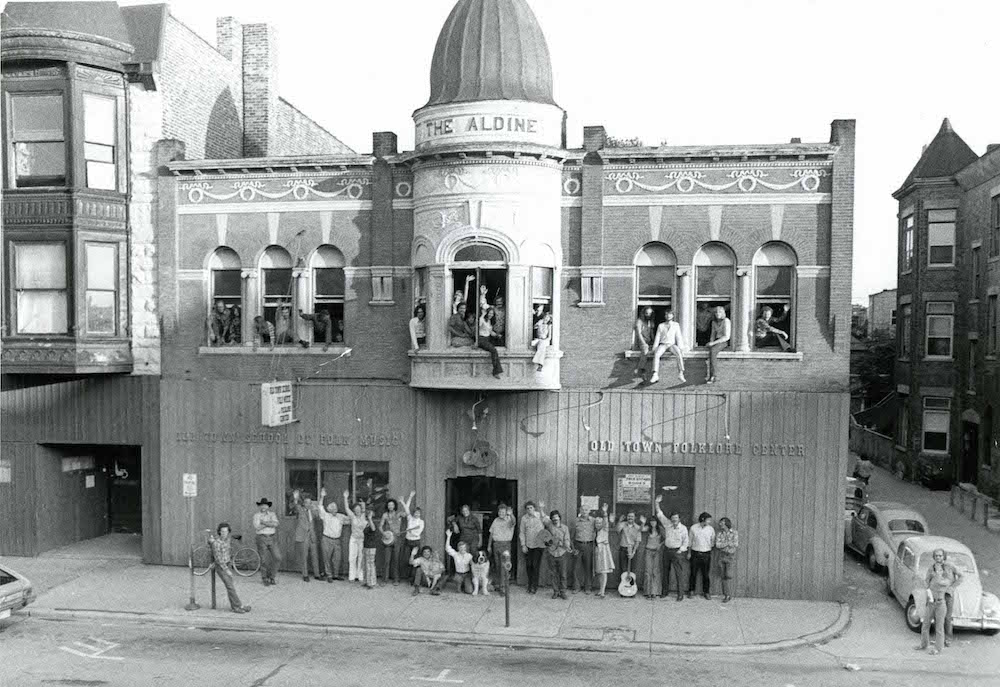 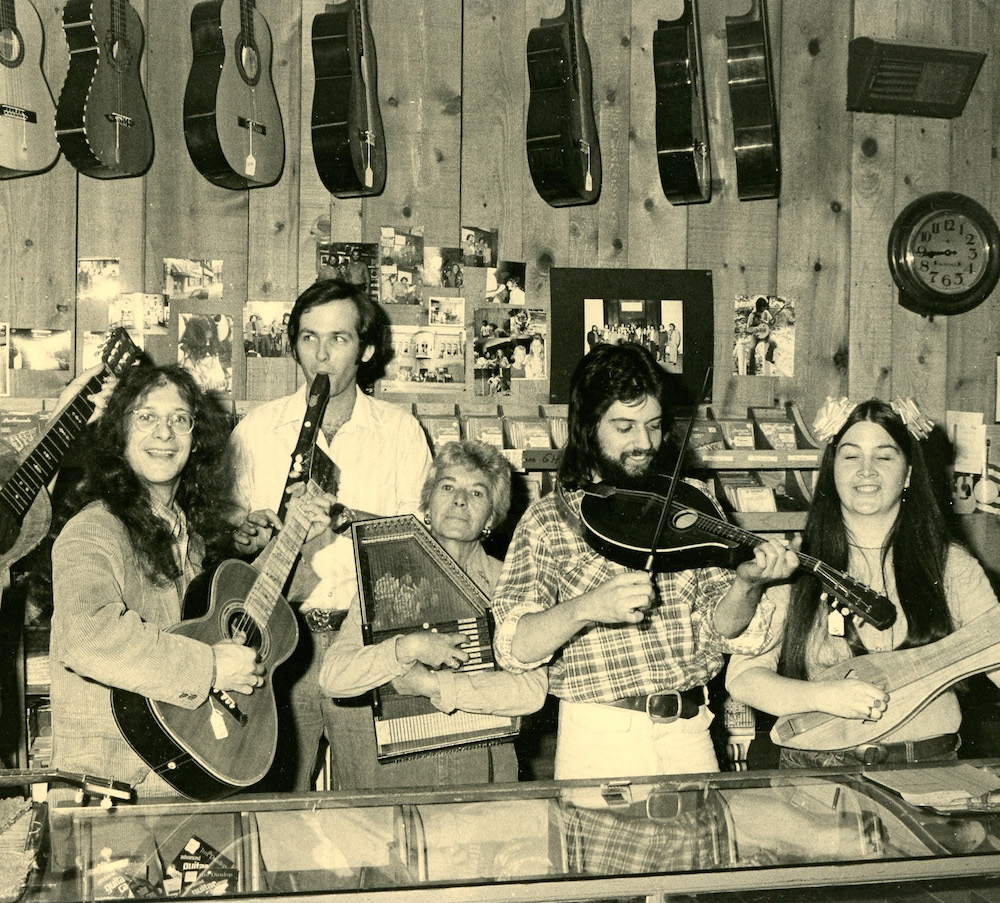 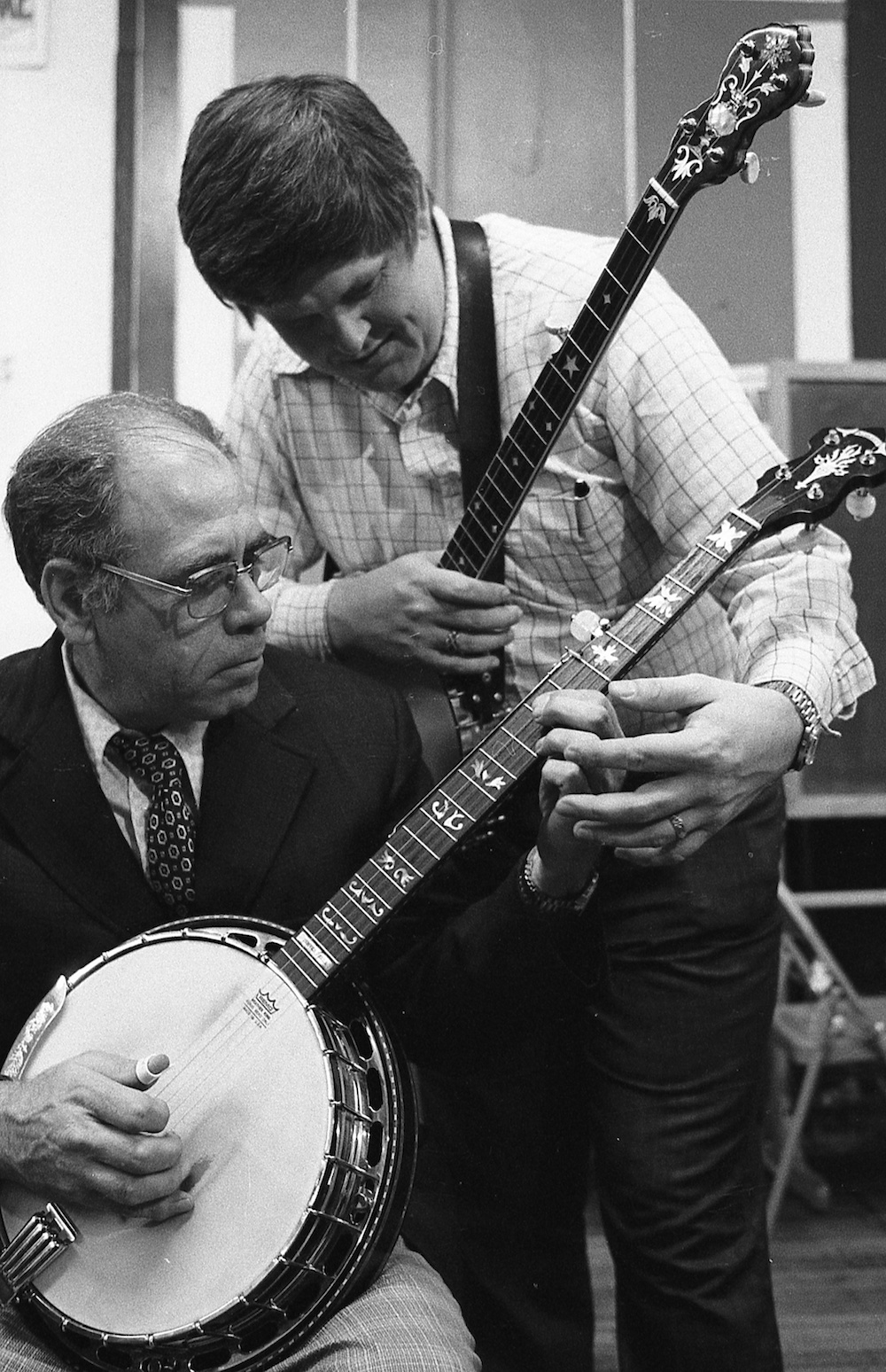 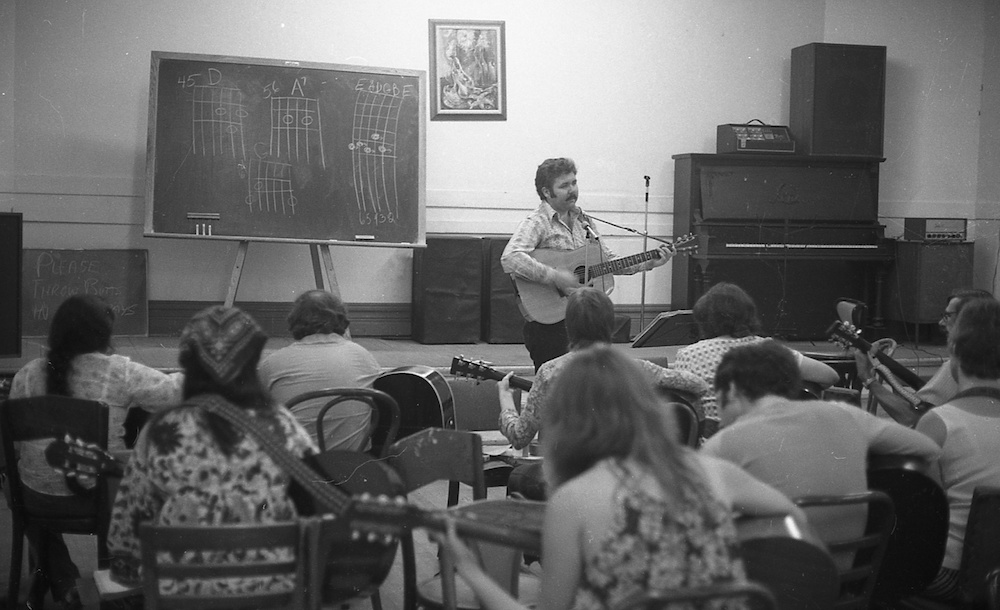 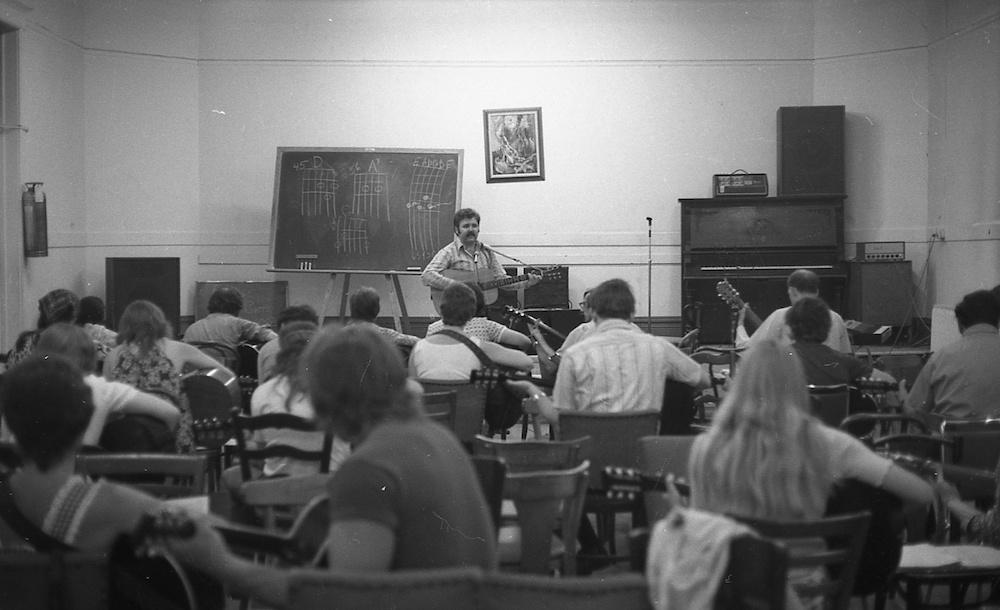 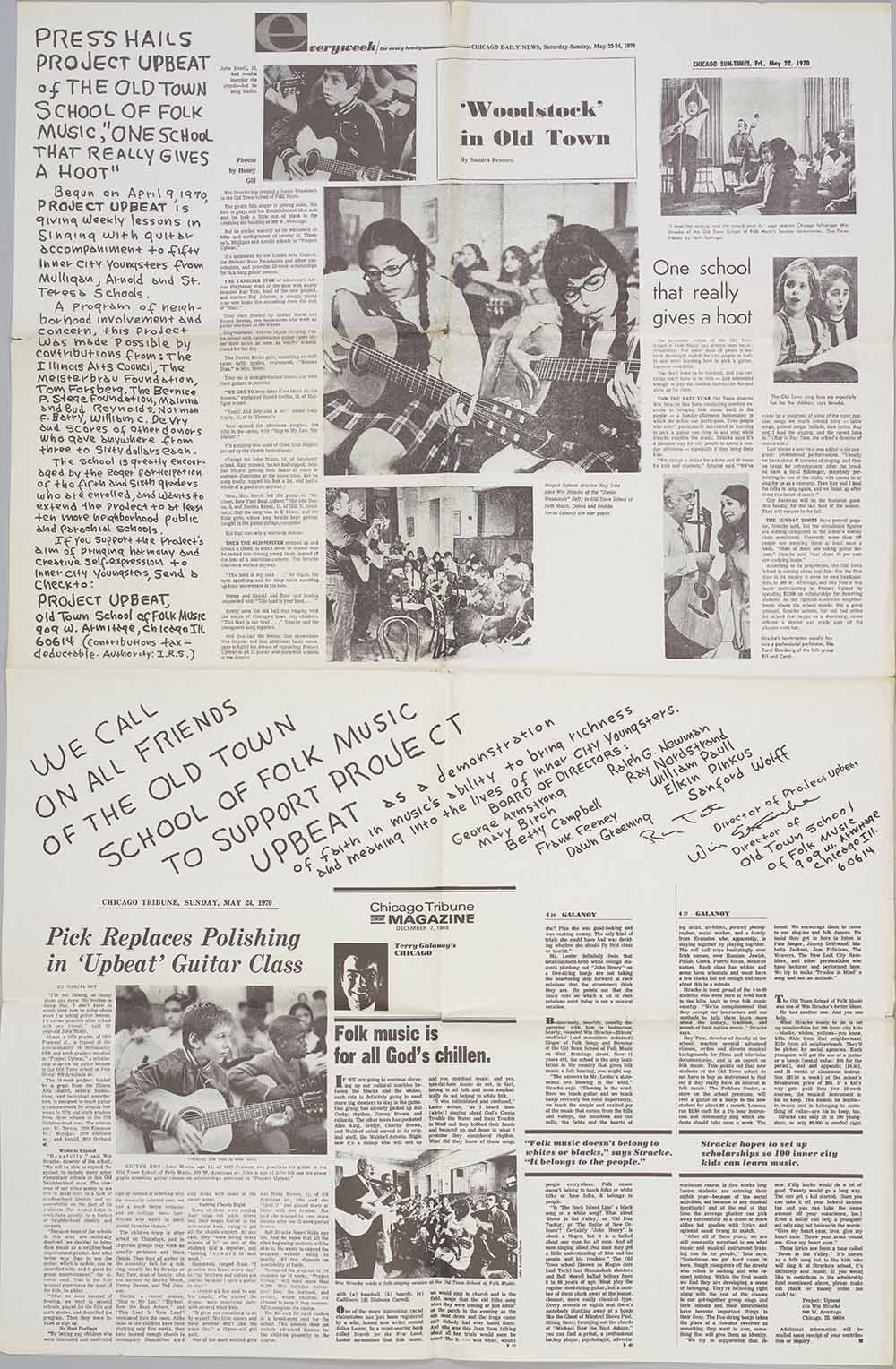 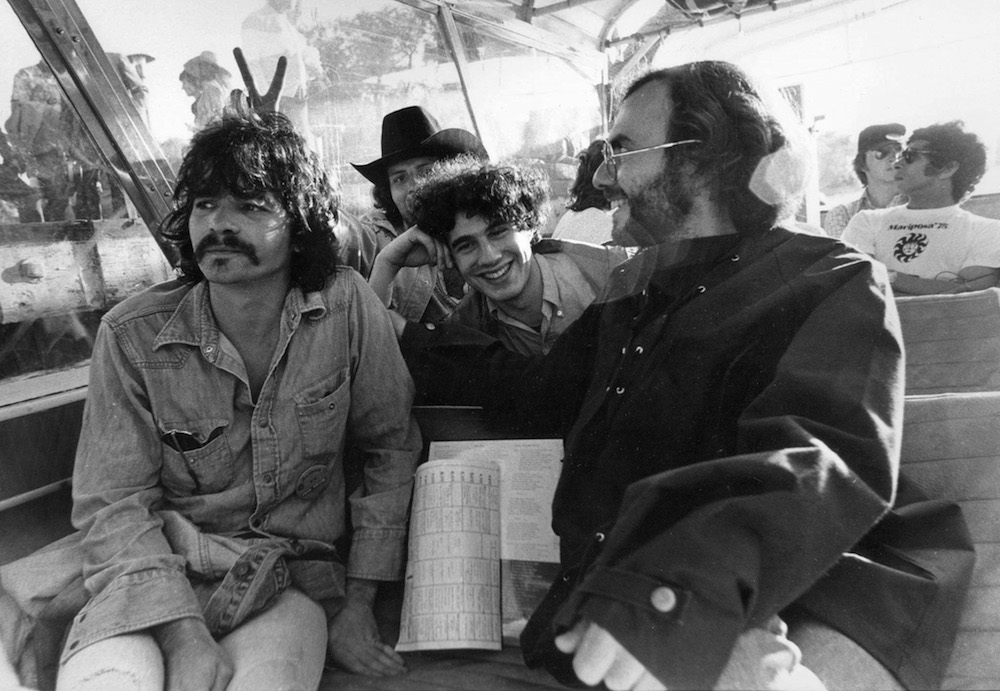 The Old Town School flourished in its original namesake neighborhood for only a decade, but took its name and exuberant spirit with it to Armitage Avenue.

In 1967, the building on North Avenue that housed the Old Town School was slated for demolition, as part of Lincoln Park’s urban renewal program. Although the Old Town neighborhood had been an ideal location in the School’s early years, with a lively, eclectic nightlife popular with tourists, by the late 1960s it was getting rougher, attracting seedier bars and clubs.

Win Stracke and Dawn Greening found a building just over a mile away at 909 W. Armitage. An aging gingerbread confection built in 1896, 15,000 square feet complete with a turret, the “The Aldine” was the first building the Old Town School owned. The school reopened there in the fall of 1968.

The next year, Win Stracke and Dawn Greening both retired. Ray Tate, who had already taken over for Frank Hamilton as Dean of Faculty, now became Executive Director as well. Unlike most of the early Old Town School faculty, Ray was a Southerner who had grown up surrounded by country music. He had played guitar since childhood and pursued a formal music education in college. It was in Chicago that he become interested in the folk music scene, where he easily found gigs. He was soon hired to teach at the Old Town School and ended up staying 20 years, all the while continuing to work as a professional musician and even running his own recording studio.

The Old Town School remained committed to participatory music-making, and the belief that the best way to learn is by doing. Ray Tate made a few adjustments, however. In hiring teachers, Ray began putting more emphasis on professional qualifications than had been done in recent years. Tate also expanded the guitar curriculum, inserting a couple of additional levels into the sequence. Individual classes were still very large, however.

Jimmy Tomasello, a student in the early 1970s, remembers 60 students in Bill Hansen’s intermediate guitar class: “He would be up with a microphone up at the front of the class and then [the assistants] would pass the things out and go around the room and help people with their fingerings.”

In the mid-1970s, an 8-week session cost $48—but for $67, students could earn college credit. In addition to folk guitar, the Old Town School offered instruction in classical guitar, guitar for children, banjo, mandolin, mountain dulcimer, and vocals (which a 1971 ad in the Near North News billed as “folkalizing”). Sunday sings, a tradition since the school’s first years, continued through the 1970s.

The school also tried out a scholarship program for "inner city" kids" called Project Upbeat. “Sometimes we get hard cases here,” Ray Tate told the Chicago Tribune in 1969. “Within the first month we find…[t]hey’re bellowing right along with the rest of the classes…. We try to make ‘Trouble in Mind’ a song and not an attitude.” It is unclear what impact these programs had, but they did get some national exposure.

Opportunities to learn and serve beyond classroom walls continued, as well. The Old Town School took part in the nationalistic nostalgia surrounding the 1976 U.S. Bicentennial by sponsoring both a lecture series on American folk music at Wilmette’s Mallinckrodt College, and a band, Ravenswood, that performed around Chicago presenting an Americana sampler (and bringing together future teachers Steve Levitt and Chris Farrell).

Beginning in 1975, the Old Town School supported a project unique in its history, a quarterly journal on folk music called Come for to Sing, “by and for the folk music community of Chicago.” Edited by Emily Friedman, with a staff of volunteer writers, the journal featured songs, interviews with and columns by local folk musicians. Come for to Sing ran for 10 years, but disassociated itself from the Old Town School in 1980.

The lively and ecumenical social scene around the Old Town School continued to offer a low-key alternative in the club-dominated Northside folk scene. “The school of folk music was just a real nice place to come to for a lot of people who weren’t necessarily going to become folk historians or folk music performers,” Ed Holstein remembered in 1992.

During the 1970s, the school was especially focused on nurturing individuals on their musical journeys, professional or otherwise. Ray Tate took pride in the support they were able to offer: “We acted as kind of a musical clearinghouse for people who came to town, who wanted to work—where can I get a job? Where can I meet so-and-so?….Can I teach here?…. A lot of what they call today ‘networking,’ though the word wasn’t used then."

Jimmy Tomasello’s life path was shaped by this kind of attention, as a college student at the front desk and the store. “It was pretty exciting. I remember Ray Tate was… Mr. Chicago Recording Artist. He used to take me to sessions and stuff. And I just started meeting all these people, who I’d admired from afar, and now I was hanging out talking to Steve Goodman, John Prine was coming in and buying strings from me.” Today he’s one of the senior teachers, and has managed the Guitar Program since 2002.