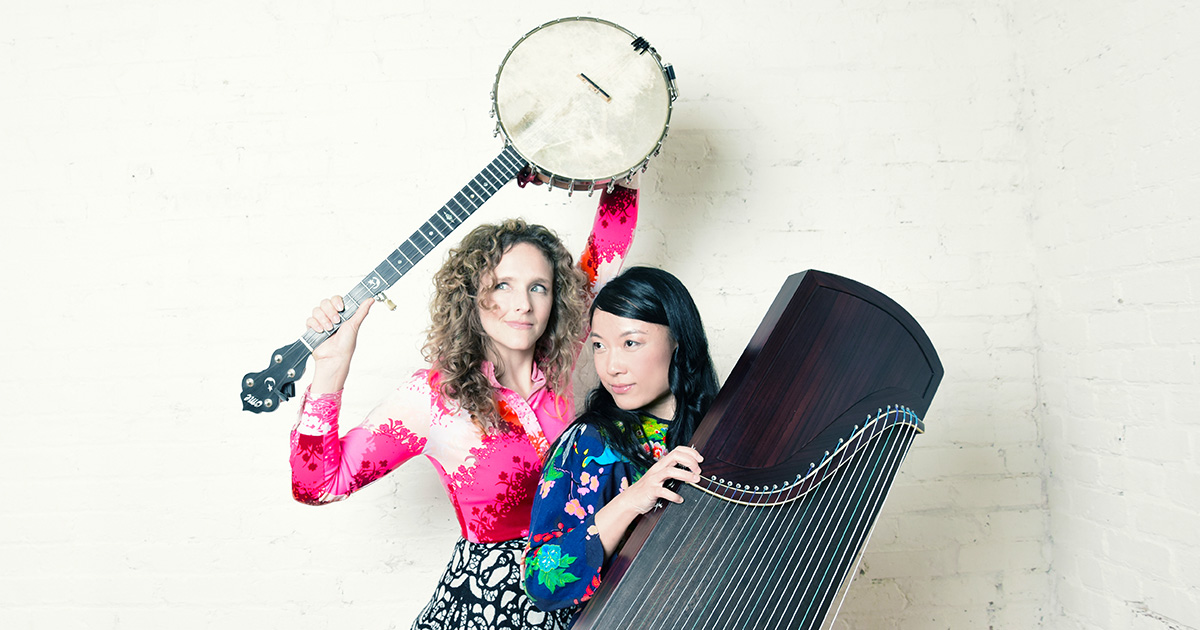 Wu Fei and Abigail Washburn‘s duo project is as unlikely, perhaps, as it was inevitable—a manifest sonic consequence of politics and vibrations commingling across continents. There is a directness in the musical duo format that makes it such a good vehicle for melodic conversations between close friends who obviously listen to each other with an athletic respect matched by their respective virtuosity.

Abigail Washburn, daughter of idealistic, hardworking midwestern parents from Evanston, IL wasn't particularly musical as a child—that would come later. As a young girl in Beijing, Wu Fei was a musical prodigy, fast-tracked to be one of the very best musicians in a country of over a billion people. Abigail expected to become a lawyer with the goal of bettering US-China relations. Fei was to become a professional musician performing state-sanctioned works in austere settings.

But both women chose a fork in the road. Abigail has improved US-China relations with a banjo not with a briefcase, touring the world and releasing a number of records that mingle Appalachian and Chinese folk music. She is one of the few foreign artists currently touring China independently and regularly and her journeys include a month-long tour (Nov-Dec 2011) of China's Silk Road supported by grants from the US Embassy, Beijing. Abigail, along with 24 other innovative and creative thinkers worldwide, was named a TED Fellow and gave a talk at the 2012 TED Convention in Long Beach about building US-China relations through music. Abigail was also awarded the Grammy for Best Folk Album in 2016, for her debut collaboration with her husband and fellow banjo-lover, Bela Fleck.

Wu Fei became a guzheng master and multilingual classically-trained composer of her own works assimilating avant-garde classical and folk music from around the world while retaining her own voice. Her commissions range from a composition for the Percussions Claviers de Lyon (France) that premiered in the Forbidden City Concert Hall in Beijing to live performances in Paris and Tokyo for Hermès. Wu Fei has composed for Balinese gamelan, symphony orchestra, choir, string quartet, chamber ensemble, film, and modern dance. Her most recent work composed for guzheng, oud and chamber ensemble, Hello Gold Mountain, honors the stories of Jewish refugees in the Shanghai Ghetto during WWII, and was awarded a MAP Fund grant. Wu Fei has toured the world extensively performing at some of the most respected museums, festivals and events. Her time in the States studying free improvisation with masters like Fred Frith and John Zorn ultimately led her to Boulder, CO, where she would discover bluegrass music and meet Abigail.

Wu Fei and Abigail Washburn's duo is a musical resolution to their specific and differing issues about home. For Fei, it means an opportunity to assimilate elements of her musical argot—Chinese classical, folk and opera—into song forms while leaving room for the free associative tendencies she developed in the practice of free improvisation. In short, it marks a return to a thrown-out rulebook with a changed perspective. For Abigail, it means musical collaboration with a sister from another Mister who speaks all the same languages. Someone with whom she can create brave, intimate music.

For the listener, it means a gift of unhurried music drawn freely from streams of raised consciousness, waves which met from halfway across the world to find they shared the same shake.