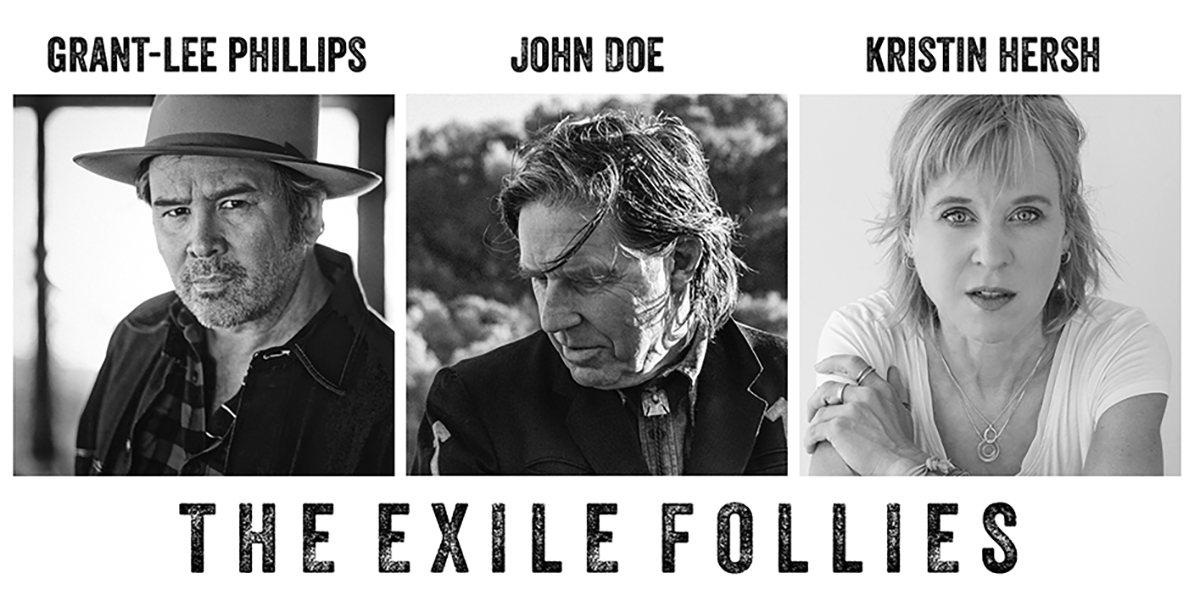 Grant-Lee Phillips on Reuniting with John Doe and Kristin Hersh for 2020 Tour.

The Exile Follies sprang from a mutual desire among John Doe, Kristin Hersh and myself to approach a tour in a different kind of way. It was 2002. We had each come from bands, each of us being the songwriters of those bands. All three of us had gone it alone at this point in our careers - a sort of self-imposed exile. Throwing Muses hadn't officially split but Kristin was well into her fifth solo album and forming a new band. John had released his fourth solo album and there was little hint that X would return, or with such a vibrant second act. I was onto writing my third solo album. A Grant Lee Buffalo reunion just wasn't on my mind. Kristin, John and myself, although very different from one another, found some interesting musical crossroads. I think we recognized that early on.

I suppose there was a curiosity about pooling our strengths together in such a way that allowed for some creative elbow room. The old tradition of songwriters in the round, where everyone sits in a circle and swaps songs was hard for any one of us to imagine. We came from the sticky clubs, where the speakers were always on the blink and chairs were a liability. We decided to tweak it a bit.

Our show was broken up into individual sets, just one of us onstage until the moment when the next performer would take the mic. As a transition, two of us would perform together. Vaudeville stuff. The running order came down to a coin toss until we settled into a comfortable rhythm. The evening would culminate with all three of us performing together.

These were two incredible artists that I had admired from afar well before we ever met but The Exile Follies established a long friendship. John Doe and I would tour together in the years to come and he invited me to sing and play on his album, (Forever hasn't Happened Yet).

When Kristin Hersh and I reunited on tour in 2018, the proposition of rekindling The Exile Follies seemed all the more destined. Kristin and I traveled by train a lot, which is my favorite mode of transportation. Hopping trains and catching up on life, a few texts zipped back and forth between the three of us. “Reunion Tour” “I'm in!” Almost twenty years later, we were off and running.

John Doe sums it up in this way, “ The Exile Follies gives folks the best of the Phillips, Hersh & Doe songwriting worlds. You get a solid solo set from each of us, some one of a kind collaborations, plus lots of jokes & fooling around in between. Until we did this we didn't know how funny we could be, especially together. I can't wait. “

Nor can Kristin and or I! Make way for The Exile Follies.