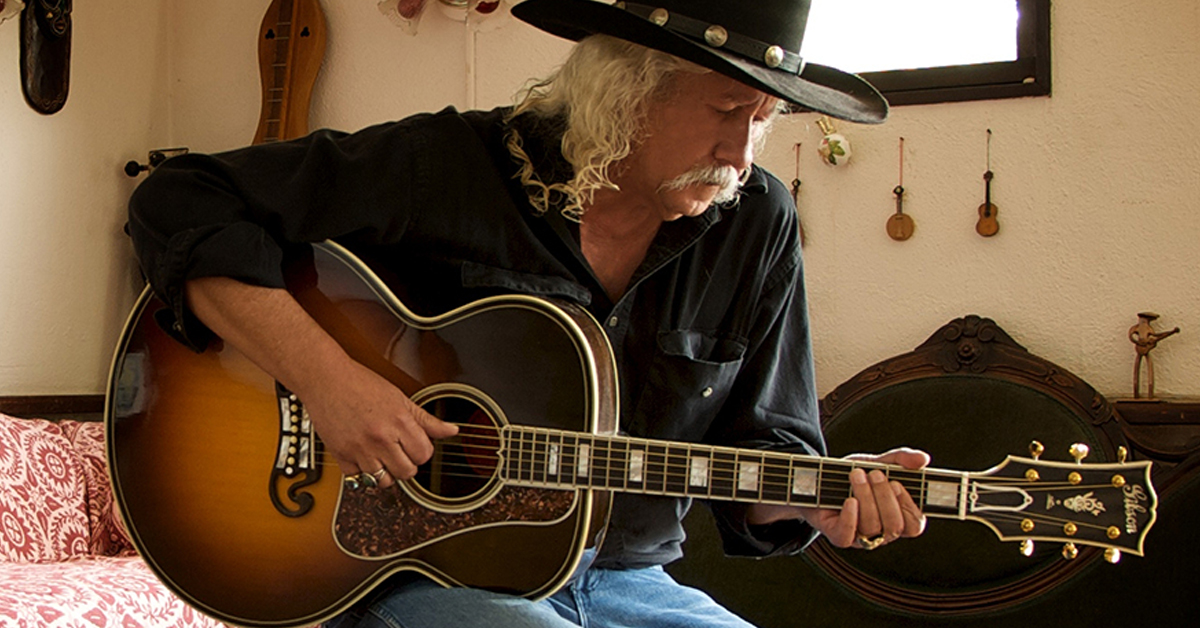 Born in Coney Island, New York in 1947, Arlo is the eldest son of Marjorie Mazia Guthrie, a professional dancer with the Martha Graham Company and founder of The Committee to Combat Huntington's Disease, and America's most beloved singer/writer/philosopher/artist Woody Guthrie. Arlo has become an iconic figure in folk music with a distinguished and varied career spanning almost sixty years.

Growing up Guthrie, Arlo was surrounded by such renowned artists as Pete Seeger, Lee Hays, Ronnie Gilbert, Sonny Terry, Brownie McGhee, and Ramblin' Jack Elliott, to name only a few. Not surprisingly, Arlo drew from these influences and he in turn became a delineative artist bridging generations of folk. He and Pete Seeger created a legendary collaboration that was sustained for over forty years. The last Pete & Arlo show was in November 30, 2013 at Carnegie Hall, only a few months before Pete passed away at the age of 94.

In 1965, a teenaged Guthrie performed a “friendly gesture” that proved to be fateful. Arlo was arrested for littering, leading him to be deemed “not moral enough to join the army.” Guthrie attained international attention at age 19 by recounting the true events on the album Alice's Restaurant in 1967. The Alice's Restaurant Massacree has become an anti-establishment anthem and an essential part of the Thanksgiving holiday season, still broadcast widely on terrestrial, internet and satellite radio. Alice's Restaurant achieved platinum status and was made into a movie in 1969, in which Arlo played himself, by the esteemed director Arthur Penn. 1969 also brought Arlo to the rock festival of the ages – Woodstock. His appearance showcased Arlo's hit Coming Into Los Angeles, which was included on the multi-platinum Woodstock: Music From The Original Soundtrack And More (1970).

Arlo married Jackie Hyde in October 1969, and over the following decade they had four children, all of whom have become entertainers/musicians themselves. The Guthrie Family has toured together throughout the years, most notably for the 2012 Guthrie Family Reunion Tour, honoring the centennial of Woody Guthrie's birth. Jackie passed away shortly after the tour, a few days after celebrating their 43rd wedding anniversary. Abe, Cathy, Annie and Sarah Lee continue to work with their dad onstage or behind the scenes. They all have children of their own and together they have continued to bring The Guthrie Family shows to the stage, the most recent being 2017—their annual Thanksgiving concert at Carnegie Hall in New York City. There were thirteen family members on stage at the same time.

Beginning the seventies under a recording contract for Warner Bros., Guthrie helped set the standard for the singer-songwriter genre burgeoning at the time. Perhaps the best known is Hobo's Lullaby (1972), featuring a diverse body of work. Most notable is the definitive version of Steve Goodman's The City of New Orleans that was a hit on all major charts. Another critically acclaimed album was Amigo (1976), which includes Massachusetts, honored in 1981 as the official state folk song.

In 1983, after more than 15 years with Warner Records, Arlo left the “music industry” to become a truly independent artist, and established Rising Son Records (RSR), one of the first indie labels in existence. RSR is still in active operation serving as his recording and production company. To date RSR has released over twenty titles, both all new material and re-mastered versions of his classic records, including the Grammy nominated Woody's 20 Grow Big Songs (1991) featuring Arlo, his brother, Joady and sister, Nora. In Times Like These (2007), was recorded with the University of Kentucky Symphony Orchestra under the direction of Arlo's friend and musical director for symphony shows, John Nardolillo. Arlo's most recent release, Alice's Restaurant 50th Anniversary (2016) is a 2 CD-set that captured the magic of his historic, commemorative tour, recorded live at The Colonial Theatre in Pittsfield, MA. This performance was also filmed by Jim Brown and continues to air on PBS stations across the country.

In 1991, inspired by his parents' activism, Arlo bought the old Trinity Church (“the” church) that is now home to The Guthrie Center, named for his parents, Woody & Marjorie Guthrie. The Guthrie Center is a not-for-profit interfaith church foundation dedicated to providing a wide range of local and international services.

In 2004, at the beginning of the 21st century, Arlo branched out creatively writing a series of award-winning illustrated books for children. He has also maintained his interest in photography, exhibiting his works in galleries from time to time, or simply sharing through social media.

But mostly Arlo remains a road warrior, touring almost constantly, alone or with friends and family. Since the first time he performed in public in 1961 at the age of 13, and after almost 60 years of shows, Arlo Guthrie, now in his 70s, has become an American elder—a keeper of the flame. 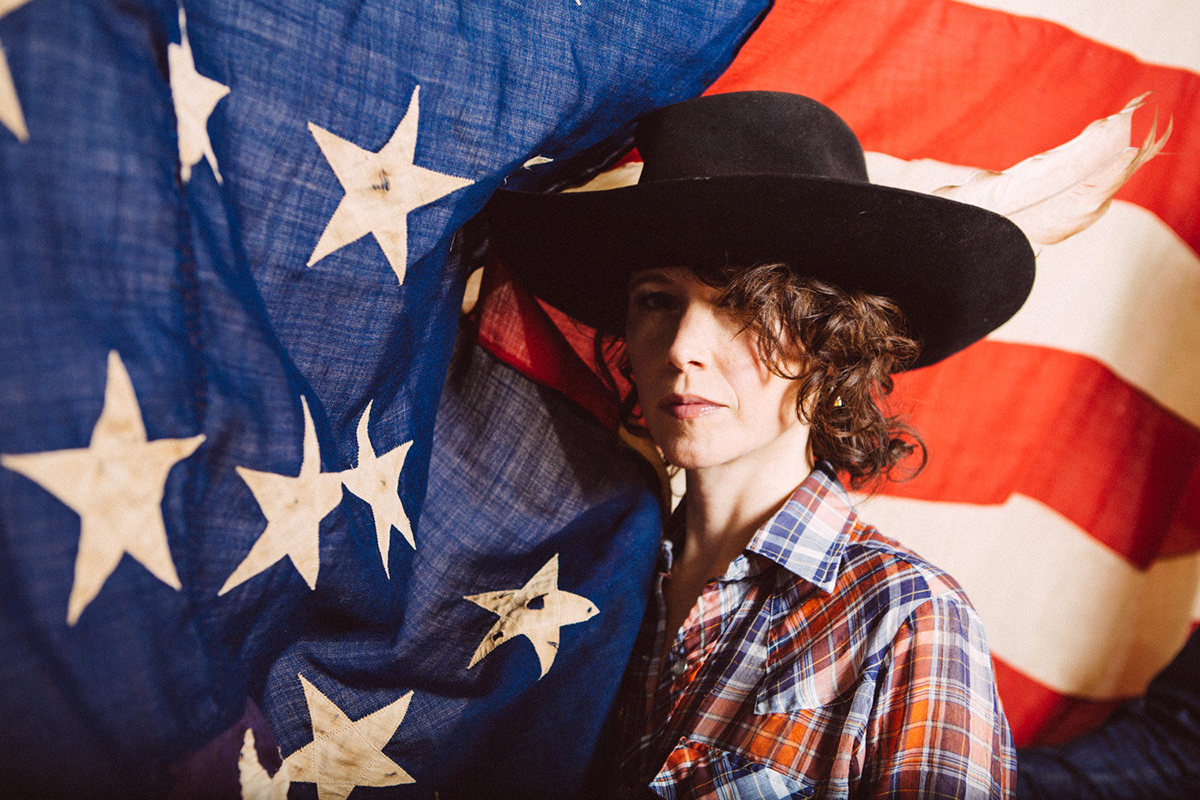 Sarah Lee Guthrie's lineage is undeniable. But if you close your eyes and forget that her last name is synonymous with the river-legacy of a widening current of American folk music, you'd still be drawn to the clarity and soul behind her voice. There is a gentle urgency to her interpretations of the songs she sings and the classic music of her heritage. It flows from the continuity of her family, her vital artistic life today and the river of songs that have guided her to where she now stands.

Over the last two decades on the road and in the studio, she and her husband Johnny Irion have created a signature pop-fused folk-rock sound that is appealing and engaging on series of critically-acclaimed album Exploration, Folksong, Bright Examples and Wassiac Way.

“Looking back on the years of shows that I have done, its been the shows with my family that stand out the most, that feel bigger than me, the best part of me, the place I shine the most. I am back on the road with my Dad now and remembering what I was made for, these are the songs that make us who we are and I love to sing them.”

Sarah Lee Guthrie now ventures on a road that leads back to the rich culture of her family running through the warmth of her own bloodlines. This is rare opportunity to witness the growth of one of America's finest young folk singers.

“Her voice was a knockout. Beautiful and crystal clear, it soared over the audience. In just a few minutes, Sarah Lee and the band members who joined her onstage made the cavernous cold space seem small, warm and intimate.” - DC Metro Theater Arts