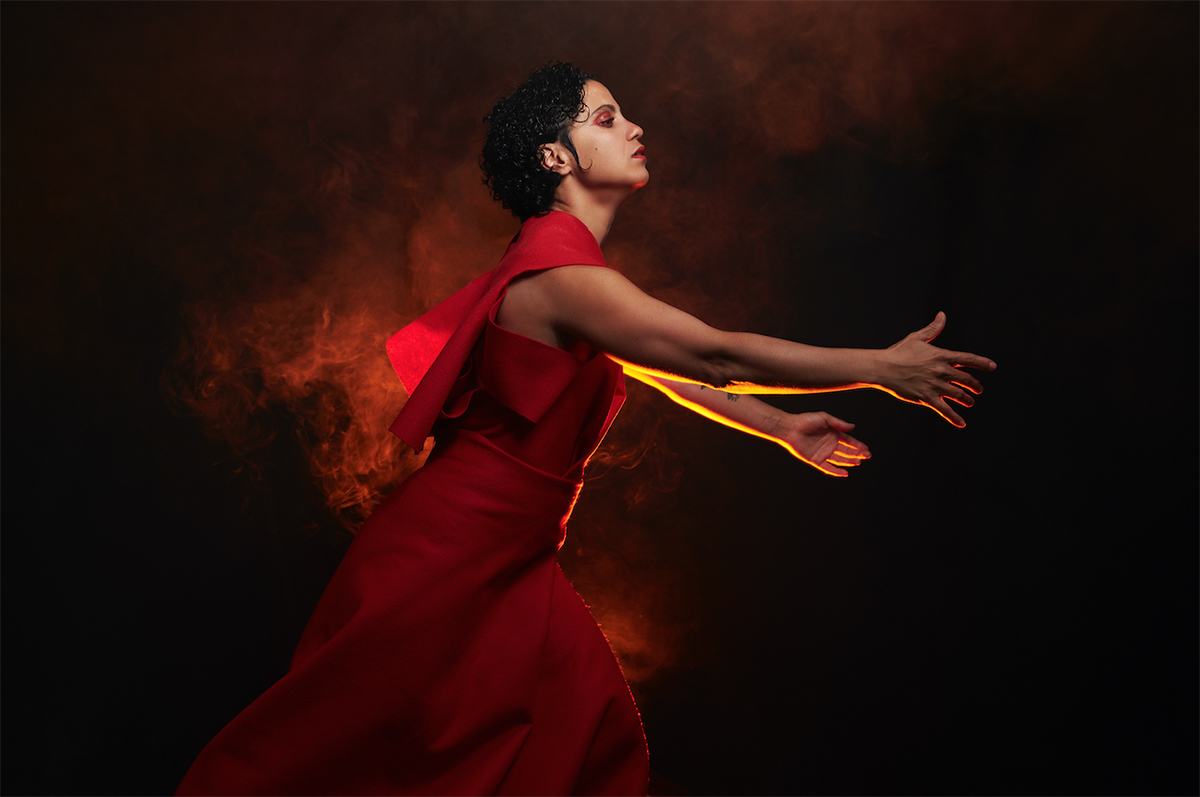 The most natural power derives from the four elements: earth, water, air, and fire.

This quartet of forces fuses art to life. As such, Emel Mathlouthi aligns nature and music on her third full-length album, Everywhere We Looked Was Burning [Partisan Records]. Striking a balance between eloquent songcraft, sparse instrumentation, and the voices of the woods, wind, sea, and flames, the Tunisia-born and New York-based singer heralds revolution by trumpeting creative experimentation.

“I had a clear vision for this,” she exclaims. “I wanted an army of furious nature sounds. There's a menacing apocalypse on the horizon, nature is taking vengeance on the ones who destroyed it. It's the goddess Kali that comes to burn everything to the ground. Deconstruction is a major theme, yet there's hope, rebuilding, and resurrection. I went deep inside myself to find true spirituality after getting lost in the atrocities we see all over the world and the superficiality we see on our social media feeds.”

Emel quietly attained the confidence to do so throughout her lifelong musical journey.
As the story goes, she offset an oppressive upbringing in the North African country of Tunisia by turning to music. Inspired by everything from Joan Baez, Janis Joplin, Led Zeppelin, and Bob Dylan to Sinéad O'Connor, The Cranberries, and Alanis Morissette, she went from performing in a high school heavy metal band to composing protest songs that spurned a fervent social media following for her artful amalgam of heartfelt melodies and off-kilter electronic production.

Among those, “Kelmti Horra (My Word is Free)” generated millions of views throughout the 2011 Tunisian Revolution. Not to mention, the song served as the anthem for the Arab Spring, gave its name to her debut album Kelmti Horra, and took her to the 2015 Nobel Peace Prize Concert where she performed it to thunderous applause.

2017's Ensen illuminated her creative strides as produced with Valgeir Sigurðsson (Sigur Ros) and Johannes Berglund (The Knife, Shout Out Louds, Ane Brun). Along the way, Pitchfork declared, “The world needs Emel Mathlouthi's anthems against the dictatorship machine,” and NPR christened her, “The 21st century's catalyst for change.”

As early as 2017, she started to envision what would become Everywhere We Looked Was Burning.

For the first time, Emel chose to sing the majority of an album in English after only recording a handful of tracks prior in the language. The choice would be informed by settling in New York with her family, discovering the “essential imagery” of poets Rainer Maria Rilke, T.S. Elliot, and John Ashbury, and “thinking back to how music in English was so important growing up.” She initially rented a house in Woodstock, NY and set off to “write about nature as well as the beauty and struggle of these times.”

While Upstate, she ventured into the world around her and spent hours recording the woods, wind, water, and fire. In the studio, she matched this earthly choir with homemade synths, keys and percussions. With a general framework in place, she joined producers Steve Moore [Zombi] and Ryan Seaton in the Catskill Mountains to record. Sessions followed with regular collaborators Ash Koosha in London, Karim Attoumane and Amine Metani in France as the music crystallized throughout 2018 and 2019. Chris Tabron (Beyoncé, Nicki Minaj, The Strokes) and Marta Salogni (Björk, M.I.A., Liars) were brought in to mix. She initially teased the entire body of work by way of “Footsteps.”

However, the 2019 single and opener “Rescuer” opens the doorway into this realm. Ambient guitar backs an angelic hum as the song builds towards an ominous beat and hypnotic swell under the buzz of a wind sample.

“The world needs rescuing, right?” she asks. “We need to rescue our senses because they've been hurt. They keep us from being completely evil. They let us awaken by poetry and art. They connect us to each other and make sense of our purpose. ‘Rescuer' is like dawn where you can start seeing the first rays of light. It's a moment to revive power.”

Elsewhere, the vulnerable, yet vital “Womb” welcomes with a tender embrace after jagged cinematic orchestration and resonant piano.

“As a mother, I have a responsibility to tell the truth as I show some kind of utopia to my kid,” she explains. “It's a sci-fi scenario where this element brings strange harmony into the universe. I want to build a path for my children to fulfill their dreams.”

Elsewhere, a rush of “percussion on water” moors “Does Anybody Sleep” as the ocean and fire roar throughout the caustic “Merrouh.” Everything culminates on rebirth in flames on the title track and closer “Everywhere We Looked Was Burning.”

“After lava, you see those little green plants,” she says. “The music is not only about the bad things happening. There has to be something positive in the aftermath.”

In the end, Emel realizes her own power for change.

“When you listen to this, I hope you feel strong and hopeful, but I want you to be conscious of it and the universal stakes,” she leaves off. “We're going through some bad times. However, we're all here. Let's fight together. See the darkness. Then, make it brighter by connecting back to nature and truth within.”