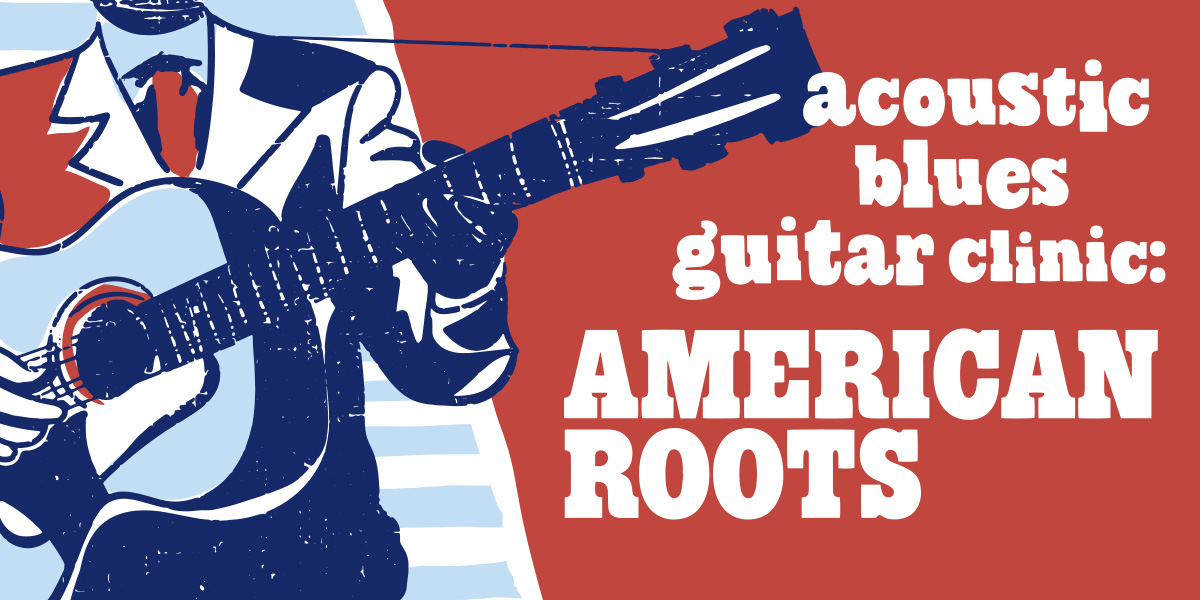 Participants are divided into three groups and each section will engage with these seasoned blues artists for 90 minutes each. It is advised those who attend have some experience with fingerpicking.

Bottleneck Blues Techniques Open D Tuning
with Eric Noden
Mixing finger-picking and bottleneck techniques is one of the most powerful sounds that an acoustic blues guitarist can tap into. Eric will break down his approach to playing the one chord Mississippi blues in open D tuning. Dig deep into the rhythms and slide riffs that bluesmen Dr. Ross and Mississippi Fred McDowell used. This groove heavy sound mixes driving, percussive rhythms with the crying sustain of the bottleneck. Guitar tablature will be provided. Bring a slide glass or metal.

Rhythm of the Rails: Ragtime Blues Guitar Techniques & Rep
with Robin Bienemann
Robin will show how early blues guitarists imitated the dynamics, dissonance and percussive rhythm of trains to make deeply expressive music. Learn how Sister Rosetta Tharpe, Bukka White and Lonnie Johnson were inspired by the sounds and images of trains. You can use those same musical principles to create your own personal blues music.

"Robert Johnson - A Man for all Keys"
with Chris Walz
Robert Johnson was one of the few early Country Blues players to create in C, A, G, E, and D. Come learn the tips and tricks for playing Robert Johnson style in all five keys. A Robert Johnson tune from each key will be provided and dissected. All you'll need is you guitar and your two hands.

Robin Bienemann is a singer-songwriter based in Chicago. His wickedly funny and poignant original songs mix contemporary themes with Jazz, Blues, and Country music. Robin mixes dry humor and startling lyrics with sophisticated music and a sense of history. At his musical core is a reverence for the guitar as a vessel to express the American psyche in all of its strange beauty and complexity. A finalist in the prestigious Kerrville Songwriting Competition, Robin performs and records solo, with his wife Jenny Bienemann, the Significant Others, and the duo Twang Bang. www.robinb.org

Chris Walz has been an active teacher at the Old Town School for over 20 years. He earned a Distinguished Teaching Artist Award in 2018. He has offered a plethora of classes and workshops in fingerstyle blues. His talents extend beyond guitar: he plays piano, banjo, and mandolin and is a terrific actor. He has performed and taught in various institutions around the world.

Enrollees should have working knowledge of basic fingerpicking patterns and tabulature

After 2 sections of instruction we will break for lunch 45 minutes BYO or try the school’s cafe or other neighborhood venues.

Acoustic Guitar and either glass or metal slide.