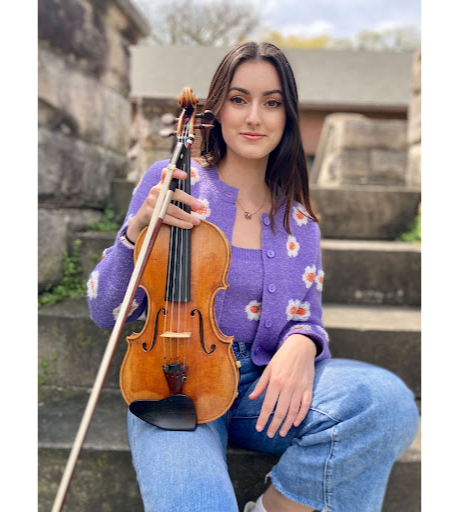 Shannon is a violinist from the North East of Scotland. She grew up in a rural area not too far from Inverness, and her earliest musical training was in group lessons in public schools and performing in local Scots fiddle competitions. She is well-versed in both classical and folk repertoire, with a pedagogical focus on honing music theory, aural, sight-reading, and technical skills. These skills teach her students to turn their hand to a variety of musical genres, ensembles, and experiences. In particular, Shannon is enthusiastic about working within her community and inspiring the next generation of young musicians to enjoy playing music, while learning from their peers and exploring music from different backgrounds.

For six years, Shannon studied at the UK’s leading specialist music school, Chetham’s School of Music with Yumi Sasaki in Manchester, England. She received her Bachelor’s degree in violin performance, with a minor in German, from Oberlin Conservatory of Music, where she studied with Sibbi Bernhardsson. She is currently completing her Master’s degree at DePaul University, studying with Janet Sung. As a member of the National Youth Orchestra of Scotland (NYOS) she performed widely in Scotland as well as at the Royal Albert Hall in the BBC Proms in 2016, and as part of their international tour to China in 2015. Shannon has performed with the Chetham’s Symphony Orchestra and as a member of the Commonwealth Festival Orchestra at Westminster Abbey for the Royal family. She also has an avid interest in community engagement through music. Shannon worked closely with the Music Therapist in the Care Center of Kendal at Oberlin for four years. Additionally, she was involved in outreach trips to Special Education schools, the Grafton Men’s Correctional Facility, and to Malta as part of the Commonwealth Resounds team. Shannon has enjoyed many opportunities to work with musicians in Europe and the United States such as Milan Vitek, Sigyn Fossnes, Peter Herresthal, and Stephan Barratt-Due. Shannon has received numerous awards and scholarships including the Ida Carroll Bursary award, Agar Trust fund, scholarships to summer festivals, and generous scholarships to attend Oberlin and DePaul. Shannon has a vested interest in performing new music and works by marginalized composers. Most recently, Shannon has performed with the 5th Wave Collective, a new music ensemble in Chicago.


Started at the Old Town School in December of 2021