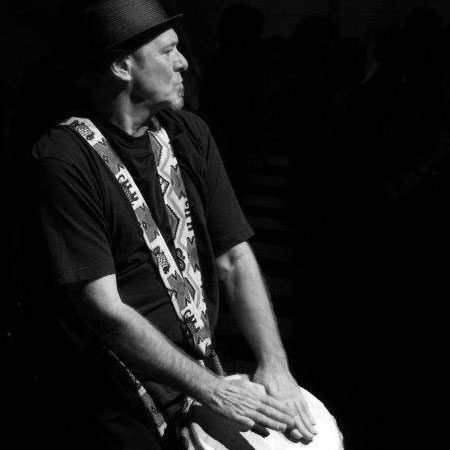 As an ongoing student of the beat, Rick defines his role as teacher as "to make simple.” He is known in the nooks and crannies of rhythmic expression for his clear, patient, personable, effective and entertaining teaching style. During each session we will learn an arrangement of at least one West African rhythm. We will also learn the fundamental subdivisions of universal rhythm and gain more confidence for expressing ourselves creatively.

Whatever it is today probably began years and years ago behind a vintage drum kit. Throughout the ‘70s and mid-’80s Rick provided the backbeat for such notables as Chicago's own Off Broadway [Atlantic Records] and Champaign new wavers Combo Audio [EMI America]. After a hiatus in the visual arts, it was well into the ‘90s when he discovered the captivating dynamic range of the West African djembe. A few intensive years were spent studying in the U.S. and Guinea, West Africa with some of the world's most respected master drummers including Mamady Keita, Famadou Konate, M'Bemba Bangoura, Gbonworo Keita, Madou Dembele, YaYa Kabo, and New Yorker Michael Markus. Soon enough Rick found himself performing and teaching the West African traditions of rhythm. In addition, Rick is also a popular and seasoned "rhythm event facilitator.” For bookings contact jmurfin@oldtownschool.org.

Started at the Old Town School in September of 2005