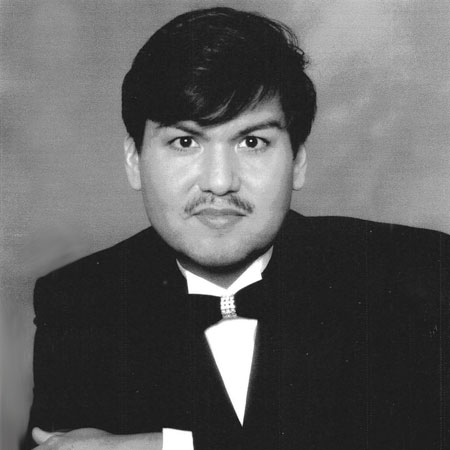 "...the golden tenor of Luis Antonio Galvez-Alcantara." as described by Hedy Weiss of the Suntimes is Director of Music and Liturgy at St. Viator Church, Chicago is a native of Lima, Peru, and Founder and Executive Director of North Shore Opera Hour, a 501(c) (3) Non-profit. He is on the Voice Faculty at Sherwood Community Music School at Columbia College and is a well-known Piano and Voice instructor in the area. In 2013 Luis received the Peruvian Tumi Award in "recognition of entrepreneurs who build a prosperous and democratic America demonstrating our cultural contribution and strength, and the influence of Latin American immigrants." He is a graduate of The Chicago College of Performing Arts and completed the Chicago Series in Liturgical Music at St. Joseph’s College in Rensellear, Indiana.

Future performances include guest soloist with the Falconaires Orchestra, The Tenors Three Concerts in the greater Chicagoland area, Peruvian Independence Day Celebrations at the Daley Center, and soloist at Lincoln Cathedral in England with the Christ Church Choir from Winnetka, Illinois. Since the beginnings of his career as church organist and choir director at the age of 10, Mr. Galvez-Alcantara has devoted his life to promoting his Peruvian heritage in music and song and as a mentor and teacher to young aspiring musicians. He is very excited and humbled to be directing the Chicago Metro Chorus, a chapter of the Barbershop Harmony Society, as this is a new opportunity to continue growing and learning in the vastness of gifts that only music can provide.

Started at the Old Town School in September of 2019