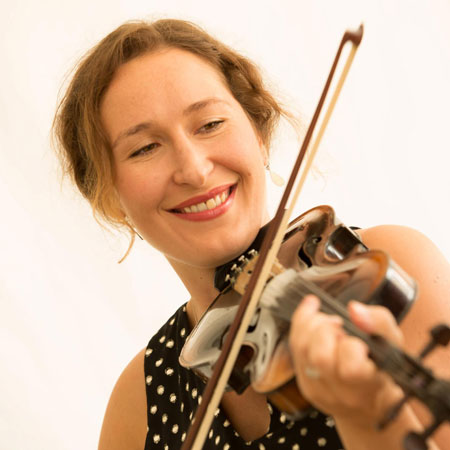 Genevieve teaches traditional fiddle tunes, to students of all ages and skill levels, in the aural tradition, as the tunes have been passed down for generations. This approach (learning by ear) captures the history and context of the music and allows for rapid memorization and instant laser focus on stylistic choices. Genevieve uses tune transcriptions only as a secondary measure to accompany learning tunes by ear. Classes provide a friendly, relaxed environment that embraces the inherent social nature of traditional music.

A native of Charleston, Illinois, Genevieve was introduced to old time string band music before she was born and spent her childhood attending square dances and music festivals. Genevieve learned to play the fiddle from her late father, Garry Harrison, (Indian Creek Delta Boys, Red Prairie Dawn) who was an influence in the world of old-time fiddling from the 1970s until his death in 2012. Her mother, Gaye Harrison, (Indian Creek Delta Boys) still resides in Charleston playing and teaching Illinois old time music.

In 2008 Garry & Genevieve earned 1st place in the Traditional Band contest at the Appalachian String Band Festival (Clifftop, WV.) with the band The New Mules.

In 2009 they released the album Pride of America. A reviewer from the Old Time Herald said, “They’ve managed to unearth a completely new vein of material, including both songs and tunes, which has never before been commercially recorded.”

In 2014, Genevieve was honored to be included in Natural Rhythm: a multimedia music recording project that follows the path of the Great Migration from New Orleans to Memphis, St. Louis, and Chicago, emulating the work of Alan Lomax.

Started at the Old Town School in January of 2019