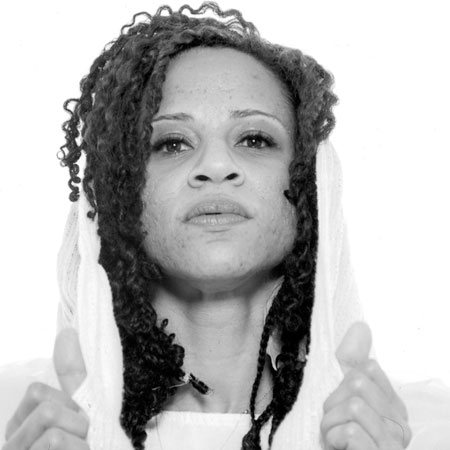 Boogie McClarin is a Chicago based teaching artist, performer, and choreographer committed to explorations of freedom, power, transformation and liberation. Using a vocabulary steeped in African diasporic traditions, sustained improvisation, and folk forms, she creates ground breaking works exploding the myths and matrices of oppression with sound and movement.

Boogie McClarin began her dance training at Whitney Young Magnet High School and the underground House parties of the late 1980s. She continued her training under Laurie Sanda at Iowa State University and where she also served as vice-president of the Black Student Alliance. She was strongly influenced by her conversations with prominent activists like Sonia Sanchez, Anthony Browder, Marimba Ani, Kwame Toure, Dr. Michael Eric Dyson and Dr. Cornell West. Returning to Chicago in 1996, Boogie continued her formal dance training at the Joel Hall Dance Center with Kelli David Lowe, Nancy Teinowitz, Betsey Herskind, Merrick Mitchell, Vanessa Truvillion, Kirby Reed, Elaine McLaurin, William Gill, Ray Mercer, and Lisa Johnson Willingham. While cultivating her talent for hip-hop and urban street forms, she has been blessed with the opportunity to train with internationally renowned Rennie Harris and Puremovement , The Electric Boogaloos, Compagnie Kafig, and Phaze II. Some of her other significant influences include participation in master classes by Anna Sokolow, David Dorfman, Ronald K. Brown, Chuck Davis, and her study of capoiera.

From 1999 – 2003 , she and Anthony Wolfe produced of The L.I.F.E. Show, the first urban dance showcase in Chicago. With shows every 60 days, The L.I.F.E. Show was an incubator for choreographers and companies, providing access to theaters, production and marketing for groups considered outside of traditional dance programming. Hip-Hop Connexion, Stick and Move, Los Jovenes Del Swing and Andy Cruz, Culture Shock Chicago are just a few of the companies that regularly performed in The L.I.F.E. Show, when other venues were not presenting urban dance. Proceeds from every show were donated to charities across the city, and over the 4 years of running, funds were given to support breast cancer awareness, suicide prevention, and AIDs awareness programs in Chicago.

She has choreographed for concerts, theater and stage in works ranging from The Bombitty of Errors for the Chicago Shakespeare Theater to Dance Africa Chicago. She has brought her unique approach to movement to a broad cross-section of audiences. As a physical instrument, she performed with a live jazz ensemble and spoken word artist in the group HUMO, opening for Ghost Face, Raekwon and Mos Def to Roy Ayers . Her work has also been presented at the Dance Chicago, Chicago Fringe Festival, and at the International Children’s Theater Festival in Edinburgh, Scotland. ”. Ms. McClarin’s works as an artist and choreographer include “Avatar-new embodiment of an old idea” ( 1996), “Saint Monster Transformed” (2001), “Loudest Minority” (2003), “It’s Serious-Jarvis Mason Production” (2005), “Making Blake” (2007), “Six of One” (2011), “Prayer for the Never Born” (2012), “NOHOME/ SOME BODY” (2014). Her children’s show The Art of B-ing has been seen by over 2000 students since it ‘s debut in 2007.

In addition to her work as an independent performer and choreographer, Boogie McClarin has been performed with some of the finest artists in classical and urban forms. She was a founding member and choreographer of Five Star Boogie Productions ( Cinderella: A hip-hop tale of an illegal alien, PartyGirl (2003), Ladies Night Out (2005), Baddest Bitch(2007)). She was a guest artist in the Black Theater Alliance award winning GhostPlay (Chicago Dance Crash), playing the role of the Female Knight. Ms. McClarin regularly performed for The Willingham Project and Kirby Reed /Ascension until 2008.

In the course of 16 years, Boogie McClarin has held residencies over 30 schools in Chicago, the Liz Lerman Dance Exchange in Washington D.C., and as far as the Sibelius Academy in Helsinki. She taught at Roosevelt University, Indiana University- Bloomington, and Columbia College Chicago. A pioneer in teaching of urban dance forms and House Dance culture, Boogie McClarin served as lead teaching artist with Kuumba Lynx and developed several successful programs with Afterschool Matters. In 2010, her Old Town School of Folk Music adult dance class was voted “Best Dance Class in Chicago” in the Reader’s “Best of Chicago”. Boogie McClarin’s work has been featured in Art Beat Chicago, Feminist Fires, and Time Out Chicago. She was a founding contributing editor of 5Magazine, author of the article “Circlejerkers” (2005) and feature interviews with Ron Trent, Terry Hunter, Mike Dunn and JoJo Baby.

Ms. McClarin has a long history of building artistic community through collaborative praxis and for the past five years has refining her voice and mission. In 2010, Ms. McClarin produced “C.H.I. Urban Dance Ritual Experience”, featuring Melissa Metro, Jason Poleon, Daniel “Bravemonk” Haywood and a cast of 30 dancers, exploring the tension between underground culture and commodification through abstracted narratives of night club archetypes. Spring 2011, she and Avery R. Young produced “Clap”, a spoken/ movement/ sustained improvisation about the futility of fame and addiction to performance presented at To Art and Profit at Link’s Hall. From 2009 -2012, Boogie collaborated with Meida McNeal on The Sweet Goddess Project, a Chicago Dancemakers Forum funded project, exploring women, The Great Migration and Chicago House culture, which led to the formation of Honey Pot Productions. Ms. McClarin has performed with Ni’ja Whitson’s Artisans of Alchemy in the critically acclaimed interdisciplinary piece, I’m Still Here and “Awakening: A Series of Starts” . In addition to traditional performance spaces, Ms. McClarin has been actively working in the Chicago Underground House Music community, sharing her love for dance music culture as host of some of the city’s finest underground events (City Beat, Rockers,Excursions and FunDa Mentals) and performer for internationally re-known DJ’s and Producers (Darryl Pandy, Chip E., Jere McAllister, Mr. A. L.I. and Ron Trent). Ms McClarin was also part of the Resident Advisor 2015 documentary “Origins: Hieroglyphic Being”.

Ms. McClarin’s approach to critical theory, movement and culture has been highlighted in academia and speaking engagements. She has spoken at Columbia College Chicago’s B -Divine Festival, Chicago Ideas Week, Chicago Public Libraries, and as a featured artist at Brown University’s Rites and Reasons Theater Chicago House Dance Weekend.

Boogie McClarin is founder of The Chicago House Institute and continues to grow and share her love of movement as faculty of the Old Town School of Folk Music.

Started at the Old Town School in January of 1999