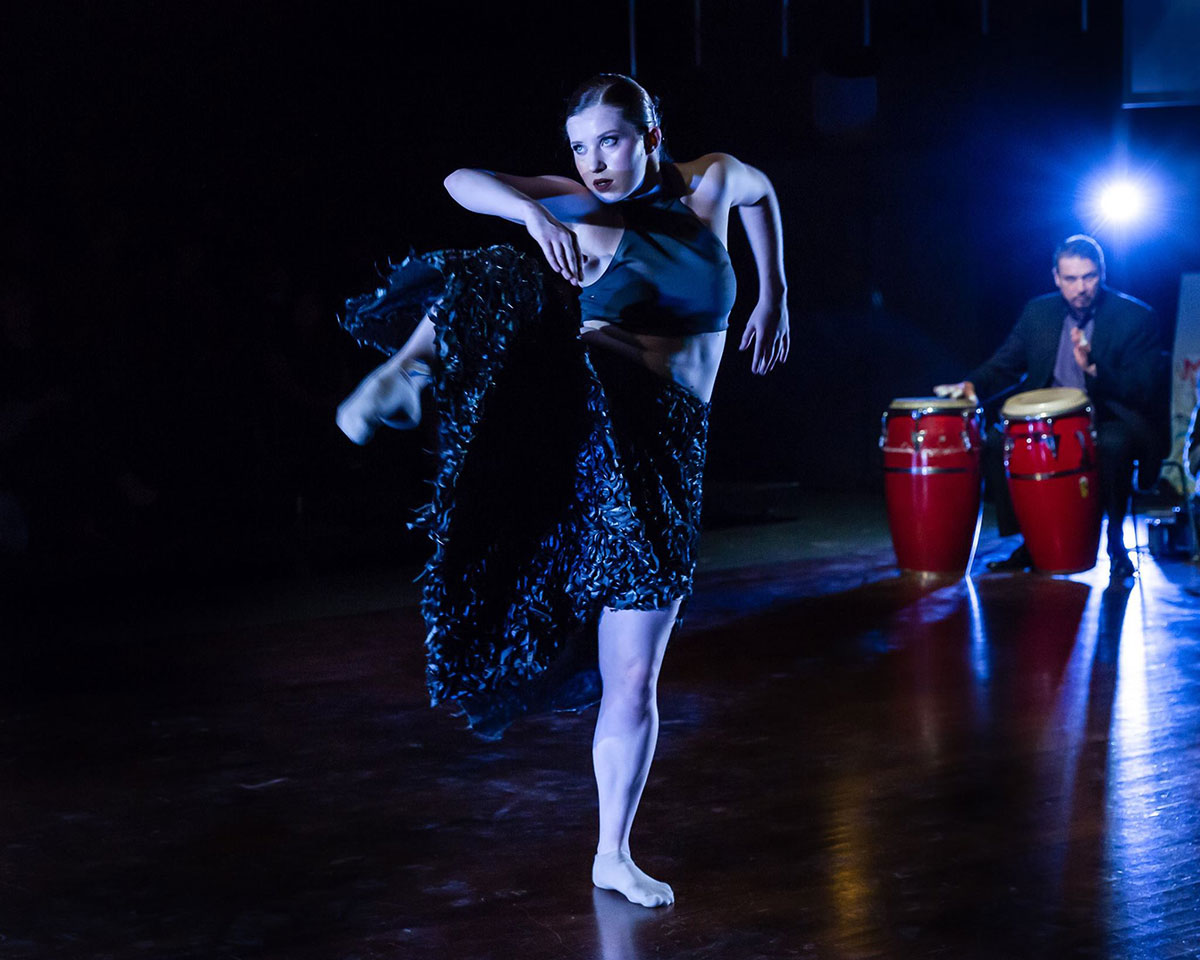 Cerqua Rivera Dance Theatre fuses music, dance, and visual art to explore and celebrate contemporary American society. Its professional Dance and Music Ensembles collaborate with one another, with visual artists and designers, and with the people and places of Chicago. The company’s multi-disciplinary artwork is theatrical and thoughtful, vivacious, and exuberant.

The company’s “bold...forays into multi-disciplinary works” were among See Chicago Dance’s top picks for 2016. Don’t miss their return to Old Town School of Folk Music.

While the company’s art could be broadly categorized as contemporary dance and jazz music accompanied by visual art, each piece varies based on the collaborators. Musical influences of Latin and classic jazz, classical and pop music are often evident as are dance influences of modern, jazz and ballet. Visual art includes still and video projections of original and sourced art or live creation (such as a painter painting in real time). CRDT’s multi-disciplinary performance work is theatrical and thoughtful, vivacious and exuberant.

In 2015 CRDT launched Inside/Out– a six-month creative process and series of audience engagement programs which culminated in a fall concert series. Rooted in the company’s collaborative ethos, Inside/Out included dramatic expansion of CRDT’s public programming (from 4 events per year to nearly 20), the length of its active creative process (from 3 to 6 months per year), and increased engagement and marked growth of the audience for the company’s core artistic programming– which tripled from 400 to 1,300. Combining this audience with that for contract engagements and outreach programs, CRDT reaches over 19,000 people each year.

Inside/Out added 1-3 interactive events per month to CRDT’s annual programming complemented by online content and dialogue. Spring through fall the company creates and rehearses new work in a rehearsal studio, then brings audiences inside this process by going out to neighborhoods around Chicago. At Inside/Out events the company shares works in progress – performance pieces that combine music, dance, and visual art - instigates discussion of this art-work-in-process, and incorporates audience feedback as the pieces are finalized.

The company’s nearly 20-year history of multi-disciplinary collaboration combined with our strategic focus to involve audiences deeply with art and artists is rooted in our founders’ vision of what art can do - gather people to contemplate factors that knit our community together and differences that add complexity to our society.

Wilfredo Rivera, co-founder of CRDT, is the company’s Artistic Director. He was a founding member of and former soloist with River North Dance Chicago. He was the recipient of an After Dark Award for outstanding choreography for "The American Plan" (2001), a Jeff Citation for original choreography in Bailiwick Theater's production of Nagasaki Dust (1997), and the Cliff Dwellers Body of Work Choreography Award (2009). Other Chicago concert credits include Trinity Irish Dance Co., Randy Duncan, Ginger Farley, Robin Lakes, the James Kelly Choreography Project, Salt Creek Ballet and numerous independent projects. Wilfredo was a featured soloist in River North Dance Chicago's Emmy Award-winning television documentary “Reality of a Dreamer;” has performed in productions featuring Diana Ross, Oprah Winfrey, Liza Minelli and Ben Vereen; and was a featured dancer representing the USA at the 1994 World Cup Soccer Series Opening Ceremony.