It is our pleasure to introduce the recipients of the 2018 Distinguished Teaching Artist Awards: Bill Brickey, Dan Fulkerson, and Lindsay Weinberg.

These honorees have been nominated by their peers and selected by a committee of members from Old Town School's Board Of Directors. Criteria for selection was based upon excellence as a teaching artist, excellence as a leader among fellow teachers, and excellence in their contributions to the community culture of the Old Town School of Folk Music. The 2018 Distinguished Teaching Artist Award recipients were honored at our fourth annual Legends Dinner on November 14, 2018.

Our teaching artists help make the School a national model for community arts learning and inspire our students, community members, and staff alike. Congratulations to Bill, Dan, and Lindsay!

Here are these three dynamic artists performing "The Storms Are On The Ocean" and talking about their experiences teaching and making music at Old Town School: 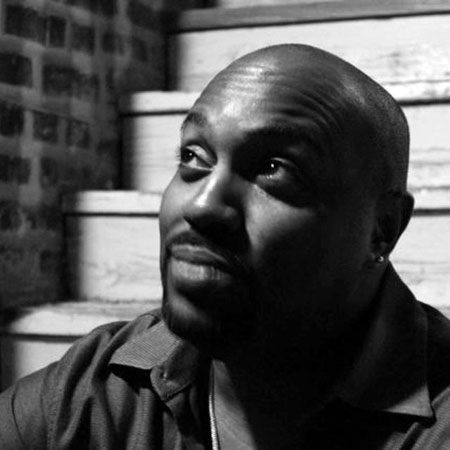 Started at Old Town School in February of 1990

Bill has been lovingly referred to by students as the "Zen Guitar Teacher" because of his self-taught stylings and open minded approach to learning. Bill’s classrooms are dynamic and full of laughter. While he follows a lesson plan, he is often inspired by feedback from his students, which he uses to customize the class. Bill’s personal inspiration for teaching comes from his work as a singer songwriter, blues guitarist, and children’s entertainer— he is a member of the bands Come Sunday, Bear Williams Band, as well as Bill Brickey and the Locomotion.

A native of the Chicago area, Bill has studied and practiced performance as an actor, singer, and musician both here and abroad. Bill's studies began in Oxford, England and London where he studied film and video production. While there, he also studied classical guitar with Gerry Garcia of the London Philharmonic. Upon his return he hosted a children’s after school TV show on the Waukegan public access channel where he read books on air when not working as a cameraman for sports and news shows. Bill is certified by the state of Illinois as a pre-kindergarten through 8th grade music teacher. He has received two Old Town School Inspired Teacher Awards and was featured on two of the Old Town School Songbook CDs. Bill was the founder of the School’s Juneteenth program, which eventually developed into World Music Wednesday concerts. He is also the producer and founder of Elastic Art’s Emerging Artist series in Logan Square, runs the Open Mic at the Carbon Arc in Lincoln Square and so much more.

“The power and versatility of Bill's voice never stops amazing me.” - Eric Zorn, Chicago Tribune "Bill Brickey can sing anything. His voice can melt your heart or make you want to dance. He electrifies a room!" - Mary Schmich , Chicago Tribune

“The big-shout voice of Bill Brickey, also a lyricist and guitarist, reveals his extensive experience as a soul and r-&-b singer…” Neil Tesser for Chicago Jazz Music Examiner”

“Bill is amazing. He’s warm, engaging, talented, and a wonderful presence in the class. Both my daughter and I loved him.” - Wiggleworms parent 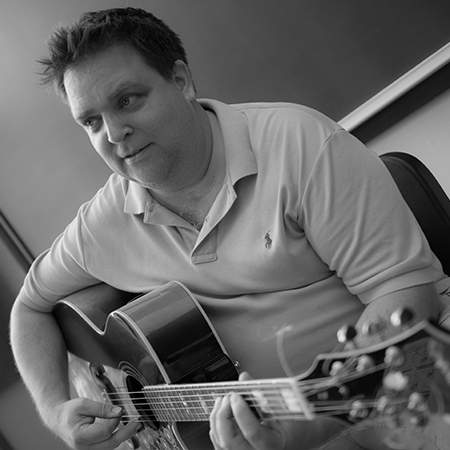 It has been rumored that Dan has taught over 10,000 students of all ages at the Old Town School of Folk Music through the years, both private students and group classes. If you ask him, he’ll say he’s ready for 10,000 more.

Having taught at Old Town School of Folk Music for 21 years, Dan has successfully acquired a niche of specialty classes for students to enjoy. Classes such as Fingerboard Theory, Teen Rock Ensembles, Rhythm, Lead Guitar Basics, and Intro into Electric Guitar Styles just to name a few. Dan’s love for rock bands has challenged him to create ensemble classes for electric guitar, bass, vocals and drums for specific bands such as the Pearl Jam ensemble, the Black Keys ensemble, The White Stripes, the Stone Temple Pilots, the Ramones, XTC, The Pretenders, Crowded House, Motley Crue, Jane’s Addiction, Sloan, Fountains of Wayne, The Pixies, Kiss, Boston, Soundgarden, Aerosmith, Green Day, Oasis, Urge Overkill, Teenage Fanclub, The Posies, Cheap Trick, Black Sabbath, Def Leppard, Big Star and many more. All these ensembles have enjoyed playing at bars around Chicago. Some students have even started their own bands after meeting and playing with other students in Dan’s classes.

Dan is a guitarist with nearly 35 years of study in such styles of music as jazz, rock, classical, punk, blues, and metal among others. He began Suzuki violin training at the age of four in Fort Wayne, Indiana and was selected into the All-City Youth Orchestra in middle school and in high school. Dan attended several Suzuki violin camps in Indiana and Wisconsin as well as the Blue Lake Fine Arts Camp for guitar and violin. He even performed in front of Dr. Suzuki himself.

He studied bluegrass fiddle with Arvel Bird from Glen Campbell’s band and had his first professional paying bluegrass fiddle gig at the age of twelve. Dan was accepted to perform with the All-City High School Orchestra in 1989 and 1990. He was the only guitarist selected for the All-State High School Jazz Big Band of Indiana in 1990. Dan Fulkerson has also studied jazz with monster jazz guitarists such as Frank Gambale, Scott Henderson and Mick Goodrick at the National Guitar Workshop.

With a Bachelor’s Degree in Music Performance on the classical guitar from Ball State University, Dan has toured and performed in 35 states, playing the blues with Studebaker John and the Hawks. He’s performed all over Canada (including the Montreal Jazz Festival) and even Turkey. He has also had dozens of gigs performing in front of thousands in India. Currently Dan performs Bach, Mendelssohn, Vivaldi, and other Classical nylon stringed guitar music for weddings and other events as well as gigging around Chicago as a guitar and vocalist in bars and at parties. He’s also writing and performing in a successful power pop band entitled Unibrow. Unibrow latest album was engineered by the legendary Steve Albini (Nirvana, Cheap Trick, Foo Fighters). 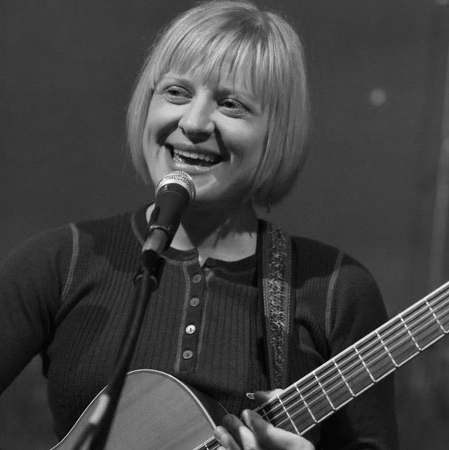 Started at Old Town School in April of 2005

Lindsay Weinberg is a lifelong performer and natural educator. A Milwaukee native, her family of musicians and teachers fostered her love of music and instilled the desire to nurture the rich experiences it can bring. In class, Lindsay is dynamic, engaging, theatrical, and personal. She strives for a classroom in which every student is challenged and every student is successful, according to their own unique ability. Whether teaching or performing, Lindsay works to inspire creativity, playfulness, bravery, enthusiasm, and wonder: qualities which come so naturally to children but are present in us all.

Lindsay went from Old Town School student to front desk employee in 2005, and soon began teaching Wiggleworms, group piano, and private lessons. She founded Young Voices, the School’s singing program for children, and Summer Double Play, a camp that helped introduce preschoolers to offerings post-Wiggleworms. In 2010 she represented OLd Town School as an up-and-coming artist in the 5x5 series at Théâtre Petit Champlain in Quebec City, and in 2014 she toured Colombia with Come Sunday, a gospel-jazz band made of Old Town School faculty. Lindsay composed the culminating song "We Will Sing" for students of all ages, levels, and instruments to perform at the Old Town School's Youth Music Showcase in 2016. She has lead outreach programs at Ravenswood and Nixon elementary schools, and in 2017 joined the Wiggleworms outreach program at the Carole Robertson Center for Learning in North Lawndale, where she leads 13 music classes a week with kids age 0-4 and their teachers. For the past year, Lindsay has been active in the leadership of the Old Town Teachers Organization (OTTO), a large group of faculty organizing to make the school a better place to work and teach.

Lindsay is also a teaching artist through Ravinia's Reach Teach Play program and a solo performer for kids and adults. She fronts the band Lindsay and the Lights Go Out and has released two albums of original material. Lindsay is a vocalist with Come Sunday, sings in a jazz duo with guitarist Mike Allemana, plays keys in Conspiracy Theories, and has made recent appearances with Mr. Nick & Friends, Congress of Starlings, Mr. & Mrs. Wednesday Night, Someone Old Someone New, Little Queens, Great Moments in Vinyl, and the Fly Honey Show. Throughout 2016 Lindsay curated and hosted Cover to Cover, a monthly live show and podcast in which three singer-songwriters present their own songs and cover each other's. Past projects include bands The Ye-Ye's, Lindsay & The Shimmies, It's A Girl, and Baba Manouche. She holds a degree in Women's and Gender Studies from Macalester College and has her Kodály Level II Music Education certification from DePaul. When she's not onstage, in the classroom, or at home with her husband Ben and cat Adeline, Lindsay can be found in the bike lanes of Chicago, singing her way to the next gig.